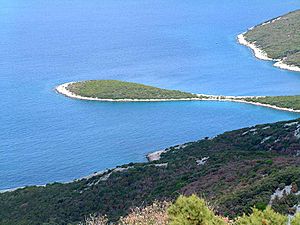 A peninsula in Croatia

A peninsula is a region of land that sticks out in a body of water. It is also defined as a piece of land with water on three sides.

Many countries are on peninsulas, and may either take up part of a peninsula (such as Portugal) or all of it (such as India). Parts of a country may also be on a peninsula. For example, Jutland is a peninsula, as is Baja California in Mexico.

If Eurasia is considered a continent then the continent of Europe is technically a peninsula. In this case, the great peninsulas of Europe, the Iberian, Italian, and Balkan peninsulas would technically be peninsulas within peninsulas. The area of the European Peninsula, comprised of Europe minus Russia, Fennoscandia, and any islands, is roughly 4.4 million square kilometers.

The Arabian Peninsula is usually cited as the largest peninsula in the world with an area of 3,237,500 square kilometers.

All content from Kiddle encyclopedia articles (including the article images and facts) can be freely used under Attribution-ShareAlike license, unless stated otherwise. Cite this article:
Peninsula Facts for Kids. Kiddle Encyclopedia.