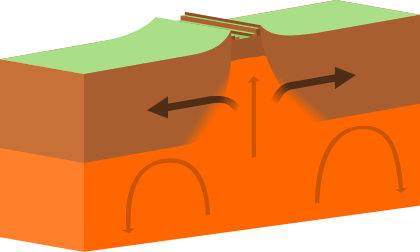 In plate tectonics, a divergent boundary or divergent plate boundary is a linear feature that exists between two tectonic plates that are moving away from each other.

Over millions of years, tectonic plates may move many hundreds of kilometers away from both sides of a divergent plate boundary. Because of this, rocks closest to a boundary are younger than rocks further away on the same plate. 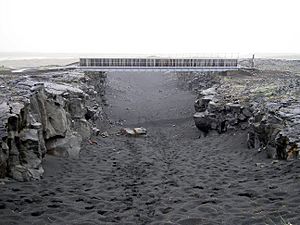 Bridge across the Álfagjá rift valley in southwest Iceland, that is part of the boundary between the Eurasian and North American continental tectonic plates.

At divergent boundaries, two plates move away from each other and the space that this creates is filled with molten magma that forms below.

The origin of new divergent boundaries at triple junctions is sometimes thought to be associated with the phenomenon known as hotspots. Here, hot mantle convecting up from the earth's core bring lots of hot material near the surface, and the kinetic energy is thought to be sufficient to break apart the lithosphere (crust and mantel around the earth).

The hot spot which may have started the Mid-Atlantic Ridge system is under Iceland which is widening at a rate of a few centimeters per year.

All content from Kiddle encyclopedia articles (including the article images and facts) can be freely used under Attribution-ShareAlike license, unless stated otherwise. Cite this article:
Divergent boundary Facts for Kids. Kiddle Encyclopedia.