An example of mantle plume locations suggested by one group. 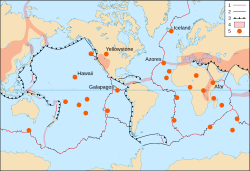 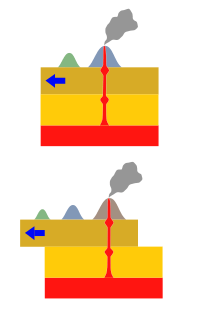 Diagram showing a cross section though the Earth's lithosphere (in yellow) with magma rising from the mantle (in red).

In geology, a hotspot or hot spot is a portion of the Earth's surface which experiences volcanism. This may be caused by a rising mantle plume or some other cause. Hotspots may be far from tectonic plate boundaries.

A volcanic hotspot is where magma pushes up from under the mantle and creates a volcano. The earth's plates move along and another volcano is created later. This creates a chain of volcanoes, such as in Hawaii.

Most volcanoes are explained by the collision or splitting apart of continental plates. This explains the long mountain ranges which have many volcanoes, such as the western edge of the Americas. It also explains the huge rift valleys such as the East African Rift Valley. Most Earth scientists accept that the cause of these great features is plate tectonics.

The problem arises with volcanoes which are not at the edges of plates. In the United States, the Yellowstone Caldera is obviously active. It has geysers caused by constant geothermal energy activity, and the floor of the crater moves up and down as much as 50 meters in a few years. The Pacific Ocean has six or seven chains of islands formed by volcanic activity. Most of these cannot be explained simply as being on the edge of two or three plates.

J. Tuzo Wilson suggested in 1963 that volcanic chains like the Hawaiian Islands result from the slow movement of a tectonic plate across a fixed hot spot deep beneath the surface of the planet. Hotspots are thought to be caused by a narrow stream of hot mantle convecting up from the Earth's core–mantle boundary called a mantle plume.

Other geologists think it is not high temperature that causes the volcanism. They think lithospheric extension (stretching of the Earth's crust) allows melt to rise from shallow depths.

Geologists have identified some 40–50 such hotspots around the globe. Those under Hawaii, Réunion, Yellowstone, Galápagos Islands, are the most active at present.

All content from Kiddle encyclopedia articles (including the article images and facts) can be freely used under Attribution-ShareAlike license, unless stated otherwise. Cite this article:
Hotspot (geology) Facts for Kids. Kiddle Encyclopedia.