The internal structure of the inner planets. 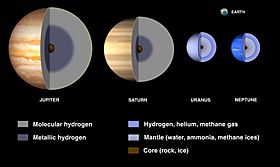 The internal structure of the outer planets.

The planetary core is the innermost layer or layers in a planet. The terrestrial planets (planets with a rocky surface) have a core mainly made of iron and could be a solid or a liquid layer. The Earth's core is partially liquid, while the cores of Mars and Venus are thought to be completely solid, because the cores do not make a magnetic field.

The gas giants also have a core made of iron. Their cores are very small, in proportion to their large size. However, the gas giants are so large that their cores can still be larger than the Earth's core. Jupiter's core is estimated to be 12 times the mass of the Earth's.

All content from Kiddle encyclopedia articles (including the article images and facts) can be freely used under Attribution-ShareAlike license, unless stated otherwise. Cite this article:
Planetary core Facts for Kids. Kiddle Encyclopedia.