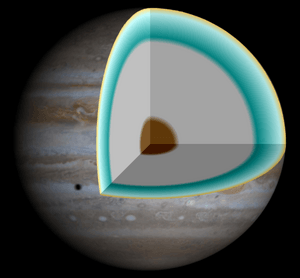 The inside of Jupiter. The solid core is shown in brown

A gas giant is a large planet that has a solid core, but a very thick atmosphere. This means that most of the planet is made up of gas. These planets are very large.

In our outer Solar System, there are four gas giants: Jupiter, Saturn, Uranus, and Neptune. However, Uranus and Neptune are better called as ice giants.

Gas giants have also been found around other stars than the sun. Most of those giant extrasolar planets are "hot giants" orbiting close to their star.

All content from Kiddle encyclopedia articles (including the article images and facts) can be freely used under Attribution-ShareAlike license, unless stated otherwise. Cite this article:
Gas giant Facts for Kids. Kiddle Encyclopedia.