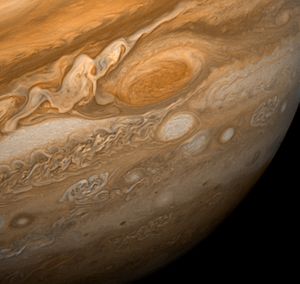 The Great Red Spot can be seen at the top middle of the picture.

The Great Red Spot is a hurricane on the surface of the planet Jupiter. It is so big that two or three Earths could fit inside it. It has been going on for at least 340 years.

All content from Kiddle encyclopedia articles (including the article images and facts) can be freely used under Attribution-ShareAlike license, unless stated otherwise. Cite this article:
Great Red Spot Facts for Kids. Kiddle Encyclopedia.