Uranus is the seventh planet from the Sun in the Solar System. It is an ice giant. It is the third largest planet in the solar system.

The planet is tilted on its axis so much that it is sideways. It has five big moons, many small ones, and a small system of 13 planetary rings.

The distance between Uranus and the Sun is about 2.8 billion km. Uranus completes its orbit around the Sun in 84 earth years. It completes a spin around itself in 17 hours and 14 minutes. This means there are about 43,000 Uranian days in one Uranian year.

Uranus was discovered in 1781. This planet can be seen with the naked eye under perfect conditions. John Flamsteed saw it decades earlier but mistook it for a star (34 Tauri).

Uranus is named after Uranus, the Greek name of the Sumerian god Anu, who was a god of sky.

Uranus has 27 known moons. They are named for characters from the works of Shakespeare and Alexander Pope. The five biggest moons are Miranda, Ariel, Umbriel, Titania and Oberon. Many moons have yet to be discovered.

In 1986, NASA's Voyager 2 visited Uranus. This is the only space probe that tried to investigate the planet from a short distance.

Uranus is covered in blue clouds. The top clouds, made of methane, are difficult to see. Lower clouds are thought to be frozen water. There are also violent storms. Wind speeds can reach 250 metres per second (900 km/h; 560 mph). Scientists are studying the clouds to try to understand the storms on the planet.

The planet Uranus has a system made of 13 rings which is far fewer than the rings of Saturn but more than those around Jupiter and Neptune. The rings of Uranus were discovered in 1977. More than 200 years ago, William Herschel also reported observing rings, but modern astronomers do not believe that he saw them, because they are very dark and faint. Two additional rings were discovered in 1986 in images taken by Voyager 2, and two outer rings were found in 2003–2005 by the Hubble Space Telescope. The rings are probably mainly composed of frozen water.

The rings of Uranus are thought to be relatively young, not more than 600 million years old. The Uranian ring system probably began from the collisional fragmentation of moons that once existed around the planet. After colliding, the moons probably broke up into many particles, which survived as narrow, optically dense rings only in zones of maximum stability.

Uranus's inner rings. The bright outer ring is the epsilon ring; eight other rings are visible.

In addition to these well-known rings, there may be numerous optically thin dust bands and faint rings between them. These faint rings and dust bands may exist only temporarily. Some of them became visible during a series of ring plane-crossing events in 2007. A number of dust bands between the rings were observed in forward-scattering geometry by Voyager 2. All rings of Uranus show azimuthal brightness variations.

The rings are made of an extremely dark material. The rings are slightly red in the ultraviolet and visible parts of the spectrum and grey in near-infrared. They show no identifiable spectral features. The chemical composition of the ring particles is not known. However, they cannot be made of pure water ice like the rings of Saturn because they are too dark, darker than the inner moons of Uranus. This shows that they are probably a mixture of the ice and a dark material. The nature of this material is not clear, but it may be organic compounds considerably darkened by the charged particle irradiation from the Uranian magnetosphere. The rings' particles may consist of a heavily processed material which was initially similar to that of the inner moons. 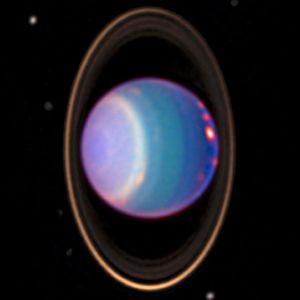 As a whole, the ring system of Uranus is unlike either the faint dusty rings of Jupiter or the broad and complex rings of Saturn, some of which are composed of very bright material—water ice. However, there are similarities with some parts of the latter ring system; the Saturnian F ring and the ε ring are both narrow, relatively dark and are shepherded by a pair of moons. The newly discovered outer rings of Uranus are similar to the outer G and E rings of Saturn. Narrow ringlets existing in the broad Saturnian rings also resemble the narrow rings of Uranus. In addition, dust bands observed between the main rings of Uranus may be similar to the rings of Jupiter. In contrast, the Neptunian ring system is quite similar to that of Uranus, although it is less complex, darker and contains more dust. The Neptunian rings are also positioned further from the planet.

Uranus revolves around the Sun once every 84 Earth years. Its average distance from the Sun is roughly 3 billion km (about 20 AU). The intensity of sunlight on Uranus is about 1/400 that on Earth. Its orbital elements were first calculated in 1783 by Pierre-Simon Laplace. With time, discrepancies began to appear between the predicted and observed orbits, and in 1841, John Couch Adams first proposed that the differences might be due to the gravitational tug of an unseen planet. In 1845, Urbain Le Verrier began his own independent research into Uranus's orbit. On September 23, 1846, Johann Gottfried Galle found a new planet, later called Neptune, at nearly the position predicted by Le Verrier.

The rotational period of the interior of Uranus is 17 hours, 14 minutes, clockwise (retrograde). As on all giant planets, its upper atmosphere experiences very strong winds in the direction of rotation. At some latitudes, such as about two-thirds of the way from the equator to the south pole, visible features of the atmosphere move much faster, making a full rotation in as little as 14 hours.

All content from Kiddle encyclopedia articles (including the article images and facts) can be freely used under Attribution-ShareAlike license, unless stated otherwise. Cite this article:
Uranus Facts for Kids. Kiddle Encyclopedia.