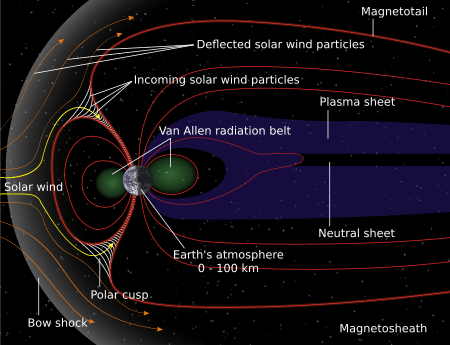 Scheme of Earth's magnetosphere. The solar wind comes from left to right

Since a magnetosphere is magnetic, it is invisible. However, the Earth's magnetosphere makes the Aurora Borealis. This is what causes the "Northern Lights" that shimmer in the night sky near the North Pole.

The border between magnetospheres is called a magnetopause.

All content from Kiddle encyclopedia articles (including the article images and facts) can be freely used under Attribution-ShareAlike license, unless stated otherwise. Cite this article:
Magnetosphere Facts for Kids. Kiddle Encyclopedia.