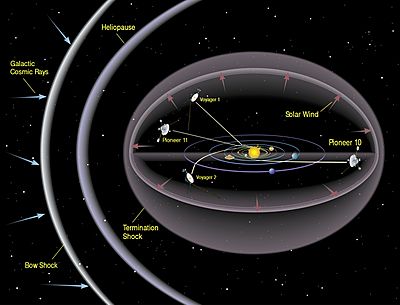 Diagram of features of the heliosphere. The shape depicted may be incorrect, based on preliminary results from the Interstellar Boundary Explorer.

The heliosphere is a bubble in space "blown" into the interstellar medium (the hydrogen and helium gas that fill the galaxy) by the solar wind. Although electrically neutral atoms from interstellar volume can pass through this bubble, almost all of the material in the heliosphere comes from the Sun itself.

In March 2005, measurements by the Solar Wind Anisotropies (SWAN) instrument onboard the Solar and Heliospheric Observatory (SOHO) have shown that the heliosphere, the solar wind-filled volume which prevents the solar system from becoming embedded in the local (ambient) interstellar medium, is not axisymmetrical, but is distorted, very likely under the effect of the local galactic magnetic field.

All content from Kiddle encyclopedia articles (including the article images and facts) can be freely used under Attribution-ShareAlike license, unless stated otherwise. Cite this article:
Heliosphere Facts for Kids. Kiddle Encyclopedia.