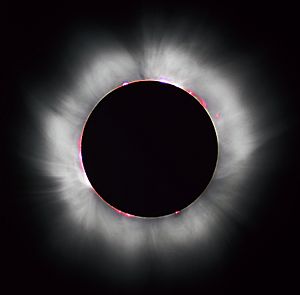 During a total solar eclipse, the solar corona can be seen by the naked eye.

The corona is the luminous "atmosphere" of the Sun extending millions of kilometres into space, most easily seen during a total solar eclipse, but also observable in a coronagraph.

An interesting feature of the corona is the fact that it is much hotter than the visible "surface" of the Sun: the photosphere is approximately 6000°C compared to the corona at over one million °C. The corona is much less dense than the photosphere, however, and so produces less light. The corona is separated from the photosphere by the relatively shallow chromosphere. The exact mechanism by which the corona is heated is still the subject of some debate, but likely possibilities include induction by the Sun's magnetic field and sonic pressure waves from below (the latter being less probable now that coronae are known to be present in early-type stars). The outer edges of the sun's corona are constantly being lost as solar wind.

Generated by solar flares or large solar prominences, "coronal transients" are sometimes released. These are enormous loops of coronal material travelling outward from the Sun at over a million kilometres per hour, containing roughly 10 times the energy of the solar flare or prominence that triggered them.

Stars other than the Sun have coronae, which can be detected using X-ray telescopes. Some stellar coronae, particularly in young stars, are much more luminous than the sun's.

The high temperature of the corona gives it unusual spectral features, which led some to suggest that it was composed of a previously unknown substance, "coronium"; however these spectral features have since been traced to known elements in high states of ionisation.

The coronal heating problem is the title of a problem in astronomy and astrophysics as to why the temperature of the Sun's corona is millions of degrees Celsius higher than that of the surface.

The amount of power required to heat the solar corona can easily be calculated. It is about 1 kilowatt for every square meter of surface area on the Sun, or 1/40,000 of the amount of light energy that escapes the Sun.

All content from Kiddle encyclopedia articles (including the article images and facts) can be freely used under Attribution-ShareAlike license, unless stated otherwise. Cite this article:
Corona Facts for Kids. Kiddle Encyclopedia.