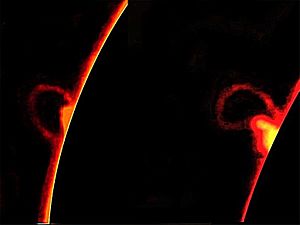 Two successive photos of a solar flare phenomenon. The solar disk was blocked in these photos for better visualization of the flare prominence.

A solar flare or solar limb is a sudden brightening observed over the Sun's surface. It is a large energy release of up to 6 × 1025 joules of energy. The energy is about a sixth of the total energy that is released from the Sun each second or 160,000,000,000 megatons of TNT. It can also be compared with the impact of Comet Shoemaker-Levy 9 with Jupiter. The release is then followed by a colossal coronal mass ejection also known as a CME (coronal mass ejection). The first flare releases clouds of electrons, ions, and atoms through the corona of the Sun into space. These clouds usually reach planet Earth a day or two after this has happened. A solar flare is sometimes referred to another phenomena in other stars, such as stellar flare.

Solar flares affect all layers of the solar atmosphere such as the photosphere, chromosphere, and corona. Solar flares produce radiation across the electromagnetic spectrum at all wavelengths from radio waves to gamma rays. Most of the energy goes to frequencies outside it's range and because of this most of the flares cannot be seen by the naked eye. Solar flares are observed (looked at) with special instruments. Solar flares occur in active regions around sunspots. Solar flares are powered by the sudden release of magnetic energy that is stored in the corona. The same energy releases may produce coronal mass ejections (CME), although the relation between CMEs and flares is still not known.

X-rays and UV radiation that is released by solar flares can affect Earth's ionosphere. Because of this, radio communications, radars and other devices may be disrupted for a short time. Richard Christopher Carrington was the first person to observe a solar flare in 1859. Carrington had spotted brightening's of small areas within a sunspot group. Stellar flares have also been observed on several of other stars. Solar flares can be "active" from several flares a day or "quiet" from several flares every week. Solar flares occurs during the 11-year cycle (the solar cycle). There are less "large flares" than smaller ones.

All content from Kiddle encyclopedia articles (including the article images and facts) can be freely used under Attribution-ShareAlike license, unless stated otherwise. Cite this article:
Solar flare Facts for Kids. Kiddle Encyclopedia.