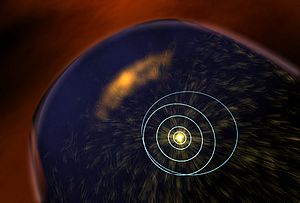 A coronal mass ejection (CME) is a significant release of plasma and accompanying magnetic field from the solar corona. They often follow solar flares and are normally present during a solar prominence eruption. The plasma is released into the solar wind, and can be observed in coronagraph imagery.

Coronal mass ejections are often associated with other forms of solar activity, but a broadly accepted theoretical understanding of these relationships has not been established. CMEs most often originate from active regions on the Sun's surface, such as groupings of sunspots associated with frequent flares. Near solar maxima, the Sun produces about three CMEs every day, whereas near solar minima, there is about one CME every five days.

The largest recorded geomagnetic perturbation, resulting presumably from a CME hitting the Earth's magnetosphere, was the solar storm of 1859 (the Carrington Event), which took down parts of the recently created US telegraph network, starting fires and shocking some telegraph operators. Some telegraphers, on the other hand, were able to continue operating with their batteries disconnected, powered by the aurora-induced currents in the lines, with normal or improved signal quality.

All content from Kiddle encyclopedia articles (including the article images and facts) can be freely used under Attribution-ShareAlike license, unless stated otherwise. Cite this article:
Coronal mass ejection Facts for Kids. Kiddle Encyclopedia.