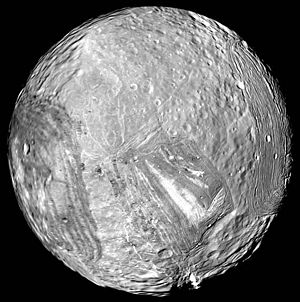 A picture of Miranda

Miranda is one of Uranus' moons. It is the smallest, and the one which has the least rotation time. Gerard Kuiper discovered it in 1948 and named it after Miranda, Prospero's daughter in William Shakespeare's play The Tempest. Sometimes it is also called Uranus V.

It's one of Uranus' strangest moons. Its complex surface may indicate partial melting of its interior, with icy material drifting to the surface.

The probe Voyager 2 made some photos in 1986. These are the only images that exist, so far. Geologically, it is the most active body in the Uranus system. The grooves and troughs reach depths of a few kilometers (or miles) and expose materials of different albedos (reflectivity). The features suggest a long, complex geologic evolution of this satellite.

All content from Kiddle encyclopedia articles (including the article images and facts) can be freely used under Attribution-ShareAlike license, unless stated otherwise. Cite this article:
Miranda (moon) Facts for Kids. Kiddle Encyclopedia.