The Tempest facts for kids 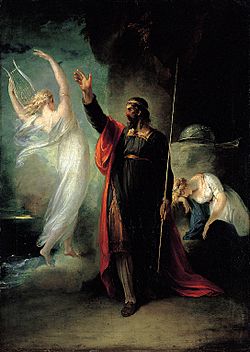 Prospero and Ariel from a painting by William Hamilton

The Tempest is one of William Shakespeare's last comedies. The story is set on an island where a magician called Prospero and his daughter live.

They are on this deserted island because of Prospero's brother, Antonio, and the King of Naples, Alonso, banishing Prospero and his daughter. Prospero takes revenge and with his magic and he makes Alonso and Antonio along with other characters become stranded on the island. Many events take place on the island but almost everyone feels guilty and sorry for their actions. In the end they head back to Milan, Italy, thanks to Prospero's spirit, Ariel.

Prospero sets up Ferdinand and Miranda and they fall in love.

The 1956 science fiction film Forbidden Planet set the story on a planet in space, Altair IV, instead of an island.

Professor Morbius (Walter Pidgeon) and his daughter Altaira (Anne Francis) are the Prospero and Miranda figures (both Prospero and Morbius having harnessed the mighty forces that inhabit their new homes). Ariel is represented by the helpful Robbie the Robot, while Sycorax is replaced with the powerful race of the Krell. Caliban is represented by the dangerous and invisible "monster from the id", a projection of Morbius' psyche born from the Krell technology instead of Sycorax's womb.

All content from Kiddle encyclopedia articles (including the article images and facts) can be freely used under Attribution-ShareAlike license, unless stated otherwise. Cite this article:
The Tempest Facts for Kids. Kiddle Encyclopedia.