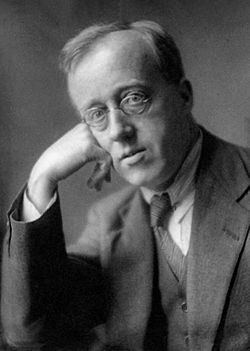 Gustav Holst (21 September 1874 - 25 May 1934) was a famous English composer. He was born in Cheltenham, Gloucestershire. He studied composition at the Royal College of Music in London. He also learned to play the trombone. He became Director of Music at St Paul’s Girls’ School, Hammersmith, (London). Some of his music was written for the pupils at this school: for example, the popular St Paul’s Suite (1912-1913) for string orchestra.

His most famous work is The Planets (1918). This is a suite of seven movements for orchestra, each about a different planet (the Earth is not included, and Pluto had not yet been discovered). The music does not really describe the planets, it describes the Roman gods after which the planets are named. Mars, for example, is the “Bringer of War”. It has a very exciting rhythm with five beats in a bar. Jupiter has a tune which has become famous as the hymn “I Vow to Thee, My Country”. He died of heart failure in London.

All content from Kiddle encyclopedia articles (including the article images and facts) can be freely used under Attribution-ShareAlike license, unless stated otherwise. Cite this article:
Gustav Holst Facts for Kids. Kiddle Encyclopedia.