Hammersmith is a district in west London, located in the London Borough of Hammersmith and Fulham.

It is bordered by Shepherds Bush to the north, Kensington to the east, Chiswick to the west, and Fulham to the south, with which it forms part of the north bank of the River Thames. It is linked by Hammersmith Bridge to Barnes in the southwest. The area is one of west London's key commercial and employment centres, and has for some decades been a major centre of London's Polish community. It is a major transport hub for west London, with two London Underground stations and a bus station at Hammersmith Broadway.

In the early 1660s, Hammersmith's first parish church, which later became St Paul's, was built by Sir Nicholas Crispe who ran the brickworks in Hammersmith. It contained a monument to Crispe as well as a bronze bust of King Charles I by Hubert Le Sueur. In 1696 Sir Samuel Morland was buried there. The church was completely rebuilt in 1883, but the monument and bust were transferred to the new church.

The Hammersmith Suspension Bridge, designed by William Tierney Clark, was built across the Thames in 1827, and rebuilt in 1893. In 1984–1985 the bridge received structural support, and between 1997 and 2000 the bridge underwent major strengthening work.

In 1745, two Scots, James Lee and Lewis Kennedy, established the Vineyard Nursery, over six acres devoted to landscaping plants. During the next hundred and fifty years the nursery introduced many new plants to England, including fuchsia and the standard rose tree.

"The Ark" office building, designed by British architect Ralph Erskine and completed in 1992, has some resemblance to the hull of a sailing ship. Hammersmith Bridge Road Surgery was designed by Guy Greenfield. "22 St Peter's Square" the former Royal Chiswick Laundry and Island Records HQ converted to architects studios and offices by Lifschutz Davidson Sandilands. It has a Hammersmith Society Conservation award plaque (2009) and has been included in tours in Architecture Week. Several of Hammersmith's pubs are listed buildings, including the Black Lion, The Dove, The George, The Hop Poles, the Hope and Anchor, the Salutation Inn and The Swan, as are Hammersmith's two parish churches, St Paul's (the town's original church, rebuilt in the 1890s) and St Peter's, built in the 1820s. 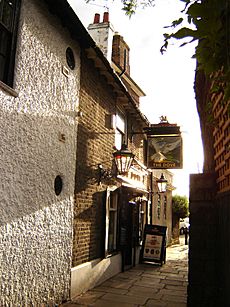 The famous Dove public house - entrance in the alley that is the only surviving trace of the old Hammersmith Village.

Riverside Studios (closed until 2018) is a cinema, performance space, bar and cafe. Riverside Studios was formerly BBC studios used for TV productions. The Lyric Hammersmith Theatre is just off King Street. Hammersmith Apollo concert hall and theatre (formerly the Carling Hammersmith Apollo, the Hammersmith Odeon, and before that the Gaumont Cinema) is just south of the gyratory. The former Hammersmith Palais nightclub has been demolished and the site reused as student accommodation. The Polish Social and Cultural Association is on King Street. It contains a theatre, an art gallery and several restaurants. Its library has one of the largest collections of Polish-language books outside Poland.

The Dove is a riverside pub with what the Guinness Book of Records listed as the smallest bar room in the world, in 2016 surviving as a small space on the right of the bar. the pub was frequented by Ernest Hemingway and Graham Greene; James Thomson lodged and likely wrote Rule Britannia here. The narrow alley in which it stands is the only remnant of the riverside village of Hammersmith, the bulk of which was demolished in the 1930s. Furnivall Gardens, which lies to the east, covers the site of Hammersmith Creek and the High Bridge. Leisure activity also takes place along Hammersmith's pedestrianised riverside, home to pubs, rowing clubs and the riverside park of Furnival Gardens. Hammersmith has a municipal park, Ravenscourt Park, to the west of the centre. Its facilities include tennis courts, a basketball court, a bowling lawn, a paddling pool and playgrounds.

Hammersmith is the historical home of the West London Penguin Swimming and Water Polo Club, formerly known as the Hammersmith Penguin Swimming Club. Hammersmith Chess Club has been active in the borough since it was formed in 1962. It was initially based in Westcott Lodge, later moving to St Paul's Church, then to Blythe House and now Lytton Hall, near West Kensington tube station.

The area is on the main A4 trunk road heading west from central London towards the M4 motorway and Heathrow Airport. The A4, a busy commuter route, passes over the area's main road junction, Hammersmith Gyratory System, on a long viaduct, the Hammersmith Flyover. Hammersmith Bridge, the first suspension bridge over the River Thames, carries traffic to and from Barnes and southwest London.

In literature and music

Hammersmith features in Charles Dickens' Great Expectations as the home of the Pocket family. Pip resides with the Pockets in their house by the river and goes boating on the river. William Morris's utopian novel News from Nowhere (1890) describes a journey up the river from Hammersmith towards Oxford. In 1930, Gustav Holst composed Hammersmith, a work for military band (later rewritten for orchestra), reflecting his impressions of the area, having lived across the river in Barnes for nearly forty years. It begins with a haunting musical depiction of the River Thames flowing underneath Hammersmith Bridge. Holst taught music at St Paul's Girls' School and composed many of his most famous works there, including his The Planets suite. A music room in the school is named after him.

All content from Kiddle encyclopedia articles (including the article images and facts) can be freely used under Attribution-ShareAlike license, unless stated otherwise. Cite this article:
Hammersmith Facts for Kids. Kiddle Encyclopedia.