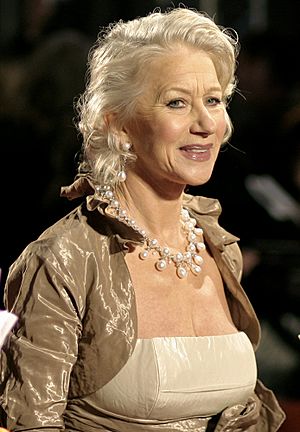 Mirren was born in Chiswick, Middlesex, England, to a Russian father and an English mother, she was raised in Essex.

She began her acting career in 1963 with the National Youth Theatre, later joining the Royal Shakespeare Company. She has since then appeared with several theatre companies in a wide variety of roles. She is widely regarded as one of the greatest British actresses of all time.

Mirren has also appeared in several series on television, notably as Inspector Jane Tennison in the Prime Suspect series, she was also acclaimed as Queen Elizabeth I in the series Elizabeth I (2006).

Mirren is an atheist. She has no children. She began a relationship with Taylor Hackford in 1986. The couple married in 1997.

All content from Kiddle encyclopedia articles (including the article images and facts) can be freely used under Attribution-ShareAlike license, unless stated otherwise. Cite this article:
Helen Mirren Facts for Kids. Kiddle Encyclopedia.