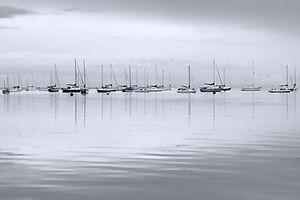 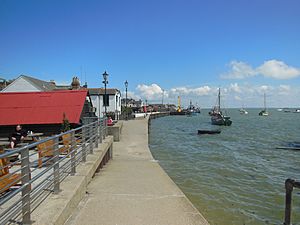 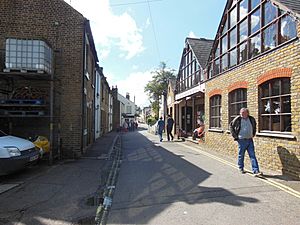 The High Street in Old Leigh

Leigh-on-Sea (pronounced /ˌliːɒnˈsiː/), also referred to as Leigh, is a town and civil parish in Essex, England. A district of Southend-on-Sea, with its own town council, it is currently the only civil parish within the borough.

Leigh-on-Sea is situated on the northern side of the Thames Estuary, only a few miles from the open waters of the North Sea to the east, and a similar distance from the Kent coast to the south. The coastal environs of the town feature a nature reserve at Two Tree Island and a centrally located beach adjacent to Bell Wharf. At low tide, Leigh's foreshore has a wide expanse of mud flats and creeks, extending offshore towards the deep water channel of the Thames (Yantlet Channel). Leigh is approximately 40 miles from central London via road and rail networks and is considered part of the London commuter belt.

Archaeological finds of pottery and coins from the Romano-British era in the locality suggest early settlement. From at least the Saxon period a hilltop clearing amidst the woodland that covered much of the surrounding area (the Rochford Hundred) of Essex came to be known as Leigh (alternatively given as 'Ley', 'Lee', or 'Lea' on old maps).

A place of minor economic importance at the time of the Norman Conquest, a reference to Leigh (Legra) appears in the Domesday Book survey of 1086. Ley is a place-name element found also in the nearby towns and villages of Hadleigh, Rayleigh, Hockley, and Thundersley.

From the late Middle Ages onwards, Leigh evolved from a rustic backwater through eras of increased and diminished maritime trade to form, by the early 20th century, the westernmost suburb of the borough of Southend-on-Sea.

The parish church, St. Clement's, dates from the 15th century, although its register of rectors refers to an earlier place of worship on the site in 1248. The fabric of the church is of Kentish ragstone, with a Tudor porch constructed of red brick. The medieval structure of the church was added to and altered during the 19th and early 20th centuries.

Leigh Hall, a medieval manor house demolished in the early 20th century, was once situated near the ancient eastern manorial boundary of Leigh and Prittlewell. The house and a trackway leading from it to a church on a nearby clifftop pre-dated the centre of modern-day Leigh-on-Sea and its primary commercial thoroughfare Broadway (formally known as Hall Road).

In the late 1830s Leigh's rector, the Rt Rev Robert Eden, commissioned a large rectory to be built (one quarter of which remains today as Leigh Library - the other wings of the building having now been demolished). The rectory and grounds occupied a six-acre site and included the construction of Rectory Grove as a public right of way, replacing both existing cliff-top path, Chess Lane and a second trackway between Elm Road and the springs situated near the top of Billet Lane.

In the 11th century it was a marginal community of homesteads, but five fishermen are recorded in the Domesday Book, allowing Leigh to claim nearly a thousand years of activity in the fishing industry.

The main seafood catch from Leigh fishing boats has always been shellfish and whitebait. Many of the local trawlers were at one time bawleys, and two of Old Leigh's pubs - the Peter Boat and Ye Olde smack- owe their names to types of local fishing boat. Local fish merchants land, process and trade a wide range of supplies daily, including shrimps, lobster, crab, seabass, haddock, cod and mackerel, cockles, whelks, mussels and oysters.

The riverside settlement of 'Old Leigh', or 'The Old Town', is historically significant; it was once on the primary shipping route to London. From the Middle Ages until the turn of the 20th century, Old Leigh hosted the settlement's market square, and high street (known as Leigh Strand). Leigh had grown to become a prosperous port by the 16th century; ships as large as 340 tons were built here for fishing and other purposes. By the 1740s however, Leigh's deep water access had become silted up (as attested to by John Wesley) and the village was in decline as an anchorage and port of call.

With the advent of the railway line from London to Southend during the mid-19th century, much of the "old town" was demolished to accommodate its passage, and new housing and streets began to be built on the ridge of hills above the settlement.

Broadway developed between the 1870s and the 1920s from a residential street to a commercial parade of shopfronts, as the town began to expand. During the 1930s, Broadway was extended further west with the demolition of a large manor house, Black House/Leigh House (built 1620). At this time also, London Road and Leigh Road were becoming established as commercial thoroughfares, with shops, workshops, industrial premises, and entertainment venues.

By the mid 20th century, Leigh had grown to become part of a larger, urban conurbation, extending further north, east and north-west, and merging with the similar residential areas of Eastwood, Chalkwell, as well as Hadleigh, a neighbouring town now in the adjacent borough of Castle Point.

During the 1990s and the early 21st century, Leigh-on-Sea went through more change: the growing dominance of out-of-town, 24-hour supermarkets and retail parks, as well as the arrival and popularity of retail online shopping, meant that much local business had to reinvent itself, either as venues for socialising, or to offer niche services and products to cater for the town's changing demographic. Bars, cafes and restaurants, boutiques, galleries and gift shops, amongst other traders, began to replace many of the traditional high street shops.

Significant urban regeneration has followed these changes and is continuing, attracting new residents to the town as well as helping accommodate an increase in the borough's local population.

In recent years, Leigh-on-Sea has frequently been cited as one of the best places to live in the UK, owing to factors such as: its proximity to London, nearby outstanding Westcliff and Southend grammar schools, good access to sports and arts activities, multiple opportunities to develop skills, and a strong sense of belonging and community spirit. A 2016 survey by Rightmove found that Leigh was the happiest place to live in the UK.

The current railway station is situated near the western end of Old Leigh's cockle sheds and boat marina, having replaced in 1934 the original station, which was opposite Bell Wharf. (A plan to site the railway station in the north of the town centre - the present-day Station Road, adjoining Elm Road - was not completed.)

Several annual events have become well established, including Leigh Regatta, The Leigh Folk Festival and The Leigh Art Trail. The regatta is held over one weekend in September. It is organized by the three Sea Scout Groups based in the Old Town to raise funds for local Scouting and a nominated charity.

All content from Kiddle encyclopedia articles (including the article images and facts) can be freely used under Attribution-ShareAlike license, unless stated otherwise. Cite this article:
Leigh-on-Sea Facts for Kids. Kiddle Encyclopedia.