Historic England (officially the Historic Buildings and Monuments Commission for England) is an executive non-departmental public body of the British Government sponsored by the Department for Digital, Culture, Media and Sport. It is tasked with protecting the historic environment of England by preserving and listing historic buildings, scheduling ancient monuments, registering historic Parks and Gardens and by advising central and local government. 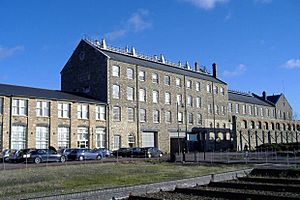 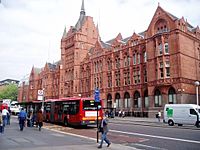 Historic England inherits English Heritage's position as the UK government's statutory adviser and a statutory consultee on all aspects of the historic environment and its heritage assets. This includes archaeology on land and underwater, historic buildings sites and areas, designated landscapes and the historic elements of the wider landscape. It monitors and reports on the state of England's heritage and publishes the annual Heritage at Risk survey which is one of the UK Government's Official statistics. It is tasked to secure the preservation and enhancement of the man-made heritage of England for the benefit of future generations.

It is not responsible for approving alterations to listed buildings. The management of listed buildings is the responsibility of local planning authorities and the Department for Communities and Local Government.

Historic England also owns the National Heritage Collection of nationally important historic sites, currently in public care. However, it does not run these sites as this function is instead carried out by the English Heritage Trust under licence until 2023.

All content from Kiddle encyclopedia articles (including the article images and facts) can be freely used under Attribution-ShareAlike license, unless stated otherwise. Cite this article:
Historic England Facts for Kids. Kiddle Encyclopedia.