Basildon /ˈbæzɪldən/ is the largest town in the borough of Basildon in the county of Essex, England.

It lies 32 miles (51 km) east of Central London, 11 miles (18 km) south of the city of Chelmsford and 10 miles (16 km) west of Southend-on-Sea. Nearby smaller towns include Billericay to the north, Wickford northeast and South Benfleet to the east. It was created as a new town after World War II in 1948 to accommodate the London population overspill, from the conglomeration of four small villages, namely Pitsea, Laindon, Basildon and Vange. The new town which took the name Basildon was the most central of the four.

The local government district of Basildon, which was formed in 1974 and received borough status in 2010, encapsulates a larger area than the town itself; the two neighbouring towns of Billericay and Wickford, as well as rural villages and smaller settlements set among the surrounding countryside, fall within its borders. Basildon Town is one of the most densely populated areas in the county.

Some of Basildon's residents work in Central London due to the town being well connected in the county to the City of London and the Docklands financial and corporate headquarters districts, with a 36-58 minute journey from the three Basildon stations to London Fenchurch Street. Basildon also has access to the City via road, on the A127, and A13.

The first historical reference to Basildon is in records from 1086. It is mentioned in the Domesday Book as 'Belesduna'. The name 'Basildon' may be derived from the Anglo-Saxon personal name 'Boerthal' and the Anglo-Saxon word 'dun', meaning hill. In historical documents, this name had various forms over the centuries, including Berdlesdon, Batlesdon and Belesduna.

Railway service started in the 19th century to Pitsea (1856) and Laindon (1888) but it was only later that proposals to provide service to the new town of Basildon, shelved for many years because of concerns that it would simply become a commuter suburb of London, were eventually forced through. A significant number of modern-day residents do commute to London.

By the beginning of the 1900s, Basildon had evolved with much of the land having been sold in small plots during a period of land speculation and development taking placed haphazardly with building by plot owners ranging from shelters created from recycled materials to brick-built homes and with amenities such as water, gas, electricity and hard-surfaced roads lacking.

In the 1940s, Billericay Urban District Council and Essex County Council, concerned by lack of amenities in the area and by its development, petitioned the Government to create a New Town. Basildon was one of eight 'New Towns' created in the South East of England after the passing of the New Towns Act. On 4 January 1949 Lewis Silkin, Minister of Town and Country Planning, officially designated Basildon as a 'New Town'. Basildon Development Corporation was formed in February 1949 to transform the designated area into a modern new town. The New Town incorporated Laindon and Pitsea and was laid out around small neighbourhoods with the first house being completed in June 1951. The first tenants moved into homes in Redgrave Road in Vange. A large, illuminated town sign "Basildon Town Centre Site" at 3.5 feet (1.1 m) was erected in 1956 by the railway and stood until early construction was completed.

The first leader elected for the local government district in 1974 was Ryan O'Rourke. Unusually, since March 2010 Basildon has a miniature famous white Hollywood sign, reading "Basildon": at five feet tall, the new sign is one-ninth of the height of the Hollywood original. This was aimed "to bring the town into the 21st century and to attract more visitors" by Basildon Enterprise Park, its full landscaping and infrastructure improvements funded by £400,000 from the Prescott-spearheaded Thames Gateway. Opponents from all parties believe spending could have been directed toward social problems.

The two main roads from London to Southend, the A13 and A127, pass to the south and north of the town respectively. Both are important commuter trunk roads, and also allow easy access to the M25 and the rest of the motorway network. Locally, the A13 gives access to Pitsea and Vange, and the A127 gives access to the town centre and Laindon. 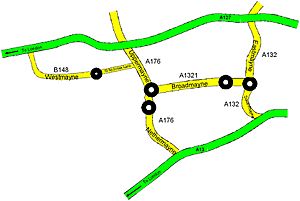 Within the town are six main roads which link to and from the A13 and A127; all of them include 'mayne' in their names.

Most bus services are provided by First Essex, connecting the town to Billericay, Wickford, and other nearby towns.

As part of Basildon's redevelopment Essex County Council had proposed that the A127 undergo significant development at a cost of £15 million which was expected to be finished by March 2011. It was funded via the Community Infrastructure Fund (CIF). The project was divided into three sections:

Throughout Basildon there are major developments planned estimated to total nearly £2 billion. These include:

Festival Leisure Park is a trading leisure park located in the north of Basildon and owned by Aviva. The Festival Leisure Park, includes 15 restaurants, a bowling and arcade centre, a family and entertainment centre with play frame and dodgem car track, two hotels, a bar, an eighteen screen Cineworld cinema, two health clubs and a nightclub called Unit 7. The Festival Leisure Park is colloquially known as "Bas Vegas". This name which was adopted by the organisation in charge of the new casino development, who used the slogan on signs welcoming people into Basildon by road. The site was previously home to the Aquatels park which hosted a zoo, ski slope and golf range that opened in 1972.

A wakeboarding complex also opened in 2012, attracting both professionals and amateurs alike

In 1989 the culture and history of the town was documented by the newly re-opened Towngate Theatre (opened 1988), when it commissioned a community play from Arnold Wesker for the town's 40th anniversary. The potted history that Wesker called "Boerthal's Hill" was acted out by a 100 or so members of the community and portrayed a welcoming haven for visitors. Although it was generally positive in its view of the town, controversy arose where the play touched on the apparent racism of politicians throughout the 1970s. The Towngate Theatre, previously called the Art Centre had been a temporary building located behind the temporary council offices (now home to Westgate) but a new purpose built theatre was built on the opposite side of the former Towngate road.

Basildon Central Library is now based in the Basildon Centre (since 1989), but had previously been in prefabs next to the temporary council offices on Fodderwick. There are also numerous smaller libraries across Basildon: Clay Hill Road in Vange, Pitsea Centre in Pitsea, Fryerns Library in Whitmore Way, and Laindon Library on New Century Road Laindon.

The Borough has a number of leisure centres, including the Basildon Sporting Village, a multimillion-pound project that opened in April 2011. It has a 50m swimming pool, fitness suite, indoor climbing wall and an athletics track. The sporting village is also home to the South Essex Gymnastics Club, a well regarded club where Olympian Max Whitlock trains. The centre attracted over one million visits in its first year of opening. It was also revealed in January 2014 that more people swim in Basildon than anywhere else in the county. There is also a smaller leisure centre named The Place and Eversley Centres in Pitsea which opened in the 1980s. 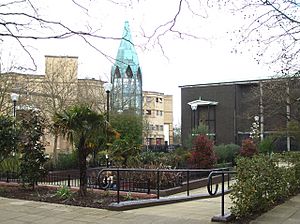 Church Garden: the area in front of St. Martin's Church in Basildon Town Centre is landscaped. 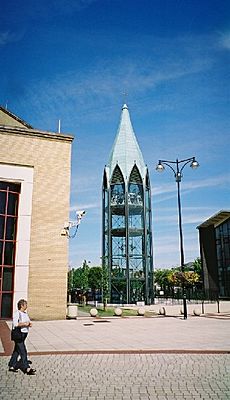 The town of Basildon currently has many modern architectural structures due to the town's economic growth.

St. Martin's Church in Basildon town centre is a modern structure. The church was consecrated in 1962 by the Bishop of Chelmsford. A freestanding Bell Tower built in 1999 was opened by Her Majesty the Queen.

Although there are a number of tall buildings in central Basildon, there are also many newly constructed buildings closer to the 'Basildon Enterprise Corridor' situated in North Basildon. 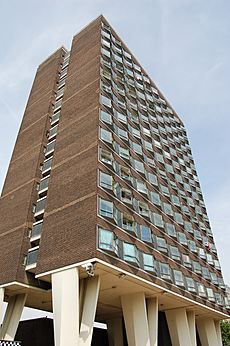 The largest structure in the new town's town centre is Brooke House, a 14-story residential tower block that fronts the west side of the town centre's East Square. Dating from 1962, it was designed by Sir Basil Spence and Anthony B Davies, with Ove Arup and Partners as the structural engineers. It has a 1960s Brutalist design, elevated on 8 massive V-shaped concrete pylons. The building was chosen to have a residential function, as opposed to commercial office space, to retain life in the town centre after the shops had closed. Shops were positioned to the rear of the building, with Brooke House acting as a covered forecourt. It was conceived as a structure to define Basildon's urban status and to act as marker to identify the town centre's location within a largely low-rise settlement set in a flat landscape. It was named after the then Minister of Housing and Local Government, Henry Brooke MP.

East of Brooke House is East Square, a sunken open-air public plaza accessed from Brooke House by a monumental staircase and a curved ramp. The east side of the square is fronted by Freedom House, containing shops on two levels, and the north side by the Post Office building, a 5-story structure. On a wall of Freedom House is the oldest piece of public sculpture in the new town: installed in 1957, it is a wire and aluminium relief by the sculptor A. J. Poole titled "Man Aspires". The whole ensemble was designed to create a formal setting for Brooke House, and has a similar Brutalist design, though softened by other architectural features. The town centre extends from East Square towards the south-west. Down the middle of this zone runs a rectangular raised pool. Within the pool is a bronze sculpture and fountain, titled "Mother and Child", by the sculptor Maurice Lambert and dating from 1959.

Sections of Basildon town centre, including Brooke House and the raised pool, are Grade II listed.

Even though Basildon is a new town there are still traces of its historical past viewable. Old roads that once connected the villages have been incorporated into the new town – Clay Hill Road, Timberlog Lane, Rectory Road, Pound Lane, Church Road, Dry Street. Dry Street is a perfect example of old Basildon, as it an undeveloped country lane that runs through One Tree Hill and Langdon Hill Country Parks

Other than St Martin's Church, most of the historical parish churches still exist. St Nicholas (13th century) sits proudly over Laindon, from where Basildon can be seen clearly, however St Peter's (13th century) at Nevendon is hidden behind Sainsburys and is little known by its residents. St Michael's at Pitsea is said to be 13th century, but was rebuilt in 1870 and now only its Bell Tower remains on Pitsea Mount. The village of Basildon's parish church, Holy Cross, can still be seen in Church Road, while Vange's 14th-century church All Saints was remodelled in the 19th century and is set back from the London Road and is Grade II listed.

Other buildings of note are the Barge Inn at Vange, the Broadway at Pitsea with its mock Tudor architecture built by Harold Howard in 1929, Cromwell Manor (formerly Pitsea Hall) by Pitsea Rail Station that dates from the 15th century and Great Chalvedon Hall (now a pub) in Tyefields which is reputed to be 16th century.

One notable building is Little Coopers Farmhouse which was originally located in Takeley. It was designated a Grade II building in 1980. in the late 1980s due to redevelopment, the whole structure was dismantled and re-built at the Wat Tyler Country Park.

On the west side of town, the Dunton Plotlands area was occupied by small rural dwellings in the mid twentieth century. Today it forms Langdon Nature Reserve.

All content from Kiddle encyclopedia articles (including the article images and facts) can be freely used under Attribution-ShareAlike license, unless stated otherwise. Cite this article:
Basildon Facts for Kids. Kiddle Encyclopedia.