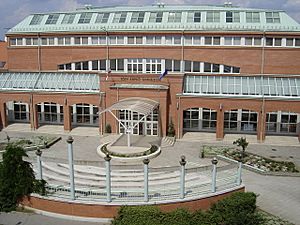 Secondary schools typically follow on from primary schools and prepare for vocational or tertiary education. Attendance is compulsory in most countries for students until the age of 16. The organisations, buildings, and terminology are more or less unique in each country.

In the United Kingdom, a person generally starts secondary school at age 11 and finish at either 16 or 18 depending on whether the secondary school has a sixth form offering post 16 education.

In education in the United States, secondary school is usually divided into two separate schools. One is called middle school and consists of grades 6, 7, and 8. And the other is called high school and consists of grades 9 through 12. A person generally starts middle school at age 11 or 12; starts high school at age 14; and finishes at age 17 or 18.

Generally there are five to six years of high school. The first year of high school is normally either grade 7 or 8, and then proceeds on to year 10 or 12.

In some schools in Australia years 11 and 12 are just a normal part of high school. Though some other schools may only progress through to year 10, in this case students will then go to college (years 11 and 12).

All content from Kiddle encyclopedia articles (including the article images and facts) can be freely used under Attribution-ShareAlike license, unless stated otherwise. Cite this article:
Secondary school Facts for Kids. Kiddle Encyclopedia.