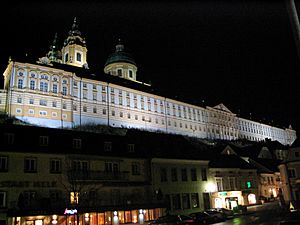 Stift Melk above the old town of Melk

Melk Abbey or Stift Melk is a Benedictine abbey. It lies on the Danube, near the city of Melk. It is located in Lower Austria. It is one of the distinguishing features of a region known as Wachau. It is an UNESCO World Heritage Site.

The abbey was almost totally destroyed in a fire, on 14 August 1297. It was rebuilt in Baroque style at the beginning of the 18th century.

All content from Kiddle encyclopedia articles (including the article images and facts) can be freely used under Attribution-ShareAlike license, unless stated otherwise. Cite this article:
Melk Abbey Facts for Kids. Kiddle Encyclopedia.