Benedict of Nursia facts for kids 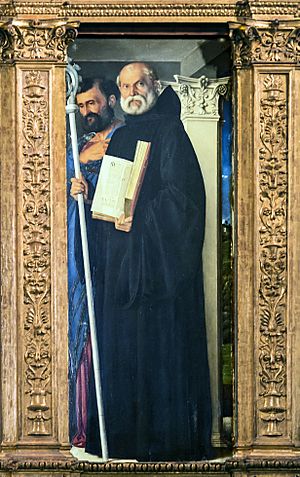 Bedenict of Nursia was the founder of the Benedictine order. He was born around 480, in Nursia (in Perugia, south of Italy), and died on the 24th of March 547, in Montecassino, about 140 kilometres (87 mi) south of Rome. Around 521, he founded the monastery at Montecassino which became the first Benedictine abbey.

All content from Kiddle encyclopedia articles (including the article images and facts) can be freely used under Attribution-ShareAlike license, unless stated otherwise. Cite this article:
Benedict of Nursia Facts for Kids. Kiddle Encyclopedia.