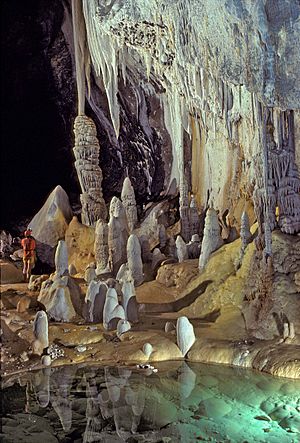 A cave is a natural underground void large enough for a human to enter. Some people suggest that the term 'cave' should only apply to cavities that have some part that does not receive daylight; however, in popular usage, the term includes smaller spaces like sea caves, rock shelters, and grottos.

Speleology is the science of exploration and study of all aspects of caves. Exploring a cave for recreation or science may be called "caving", "potholing", or occasionally (only in Canada and the United States), "spelunking".

Caves are formed by geologic processes. These may involve a combination of chemical processes, erosion from water, tectonic forces, microorganisms, pressure, and atmospheric influences. Most caves are formed in limestone by solution. 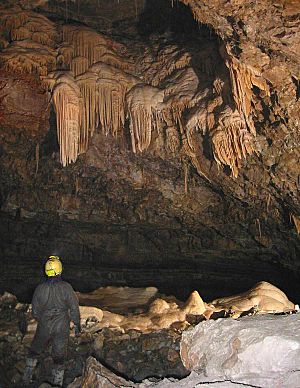 Speleothems in Hall of the Mountain King, Ogof Craig a Ffynnon, South Wales. 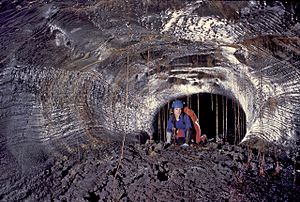 Exploring a lava tube in Hawaii 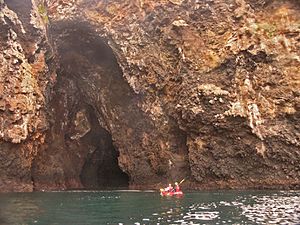 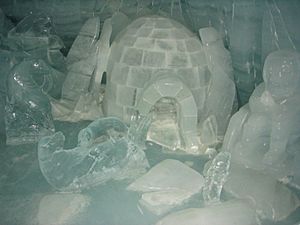 Caves are found throughout the world, but only a portion of them have been explored and documented by cavers. The distribution of documented cave systems is widely skewed toward countries where caving has been popular for many years (such as France, Italy, Australia, the UK, the United States, etc.). As a result, explored caves are found widely in Europe, Asia, North America, and Oceania but are sparse in South America, Africa, and Antarctica. This is a great generalization, as large expanses of North America and Asia contain no documented caves, whereas areas such as the Madagascar dry deciduous forests and parts of Brazil contain many documented caves. As the world’s expanses of soluble bedrock are researched by cavers, the distribution of documented caves is likely to shift. For example, China, despite containing around half the world's exposed limestone - more than 1,000,000 km² - has relatively few documented caves. 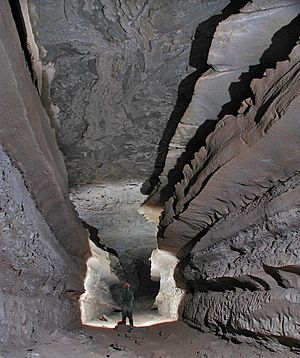 The cave system with the greatest total length of passage is Mammoth Cave (Kentucky, USA) at 591 km in length. This record is unlikely to be surpassed in the near future, as the next most extensive known cave is Jewel Cave near Custer, South Dakota, at 225 km.

The deepest known cave (measured from its highest entrance to its lowest point) is Voronya Cave (Abkhazia, Georgia), with a depth of 2,190 m. This was the first cave to be explored to a depth of more than 2 km. (The first cave to be descended below 1 km was the famous Gouffre Berger in France). The Gouffre Mirolda - Lucien Bouclier cave in France (1733 m) and the Lamprechtsofen Vogelschacht Weg Schacht in Austria (1632 m) are the current second- and third-deepest caves. This particular record has changed several times in recent years.

The deepest individual pitch (vertical drop) within a cave is 603 m in Vrtoglavica Cave in Slovenia, followed by Patkov Gušt (553 m) in the Velebit mountain, Croatia.

The largest individual cavern ever discovered is the Sarawak chamber, in the Gunung Mulu National Park (Miri, Sarawak, Borneo, Malaysia), a sloping, boulder strewn chamber with an area of approximately 600 m by 400 m and a height of 80 m. 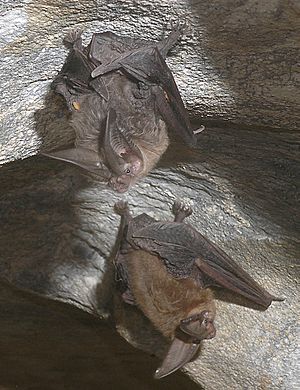 Townsend's Big-eared bats in a cave

Cave-inhabiting animals are often categorized as troglobites (cave-limited species), troglophiles (species that can live their entire lives in caves, but also occur in other environments), trogloxenes (species that use caves, but cannot complete their life cycle wholly in caves) and accidentals (animals not in one of the previous categories). Some authors use separate terminology for aquatic forms (e.g., stygobites, stygophiles, and stygoxenes).

Of these animals, the troglobites are perhaps the most unusual organisms. Troglobitic species often show a number of characteristics, termed troglomorphies, associated with their adaptation to subterranean life. These characteristics may include a loss of pigment (often resulting in a pale or white coloration), a loss of eyes (or at least of optical functionality), an elongation of appendages, and an enhancement of other senses (such as the ability to sense vibrations in water). Aquatic troglobites (or stygobites), such as the endangered Alabama cave shrimp, live in bodies of water found in caves and get nutrients from detritus washed into their caves and from the feces of bats and other cave inhabitants. Other aquatic troglobites include cave fish, the Olm, and the blind salamander.

Cave insects such as Oligaphorura (formerly Archaphorura) schoetti are troglophiles, reaching 1.7 mm in length. They have extensive distribution and have been studied fairly widely. Most specimens are female but a male specimen was collected from St Cuthberts Swallet in 1969.

Bats, such as the Gray bat and Mexican Free-tailed Bat, are trogloxenes and are often found in caves; they forage outside of the caves. Some species of cave crickets are classified as trogloxenes, because they roost in caves by day and forage above ground at night.

Because of the fragile nature of the cave ecosystem, and the fact that cave regions tend to be isolated from one another, caves harbor a number of endangered species, such as the Tooth cave spider, Liphistiidae Liphistius trapdoor spider, and the Gray bat.

Caves are visited by many surface-living animals, including humans. These are usually relatively short-lived incursions, due to the lack of light and sustenance.

Throughout history, primitive peoples have made use of caves for shelter, burial, or as religious sites. Since items placed in caves are protected from the climate and scavenging animals, this means caves are an archaeological treasure house for learning about these people. Cave paintings are of particular interest. One example is the Great Cave of Niah, in Malaysia, which contains evidence of human habitation dating back 40,000 years.

In Germany some experts found signs of cannibalism in the caves at the Hönne.

Caves are also important for geological research because they can reveal details of past climatic conditions in speleothems and sedimentary rock layers.

Caves are frequently used today as sites for recreation. Caving, for example, is the popular sport of cave exploration. For the less adventurous, a number of the world's prettier and more accessible caves have been converted into show caves, where artificial lighting, floors, and other aids allow the casual visitor to experience the cave with minimal inconvenience. Caves have also been used for BASE jumping and cave diving.

Caves are also used for the preservation or aging of wine and cheese. The constant, slightly chilly temperature and high humidity that most caves possess makes them ideal for such uses.

All content from Kiddle encyclopedia articles (including the article images and facts) can be freely used under Attribution-ShareAlike license, unless stated otherwise. Cite this article:
Cave Facts for Kids. Kiddle Encyclopedia.