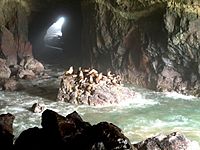 A Sea cave in Oregon

Sea caves are a hollow chamber in a coastal cliff, made by the pounding power of crashing waves. "Sea arches" and "sea stacks" are also carved from these rocky cliffs.Sea waves carry on both erosional and depositional activities .The process of sea erosion is called marine erosion. 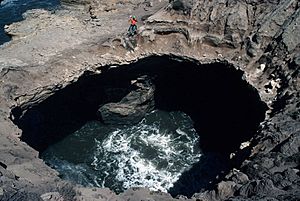 Littoral caves may be found in a wide variety of host rocks, ranging from sedimentary to metamorphic to igneous, but caves in the latter tend to be larger due to the greater strength of the host rock. However, there are some notable exceptions as discussed below.

In order to form a sea cave, the host rock must first contain a weak zone. In metamorphic or igneous rock, this is typically either a fault as in the caves of the Channel Islands of California, or a dike as in the large sea caves of Kauai, Hawaii’s Na Pali Coast. In sedimentary rocks, this may be a bedding-plane parting or a contact between layers of different hardness. The latter may also occur in igneous rocks, such as in the caves on Santa Cruz Island, California, where waves have attacked the contact between the andesitic basalt and the agglomerate.

The driving force in littoral cave development is wave action. Erosion is ongoing anywhere that waves batter rocky coasts, but where sea cliffs contain zones of weakness, rock is removed at a greater rate along these zones. As the sea reaches into the fissures thus formed, they begin to widen and deepen due to the tremendous force exerted within a confined space, not only by direct action of the surf and any rock particles that it bears, but also by compression of air within. Blowholes (partially submerged caves that eject large sprays of sea water as waves retreat and allow rapid re-expansion of air compressed within) attest to this process. Adding to the hydraulic power of the waves is the abrasive force of suspended sand and rock. Most sea-cave walls are irregular and chunky, reflecting an erosional process where the rock is fractured piece by piece. However, some caves have portions where the walls are rounded and smoothed, typically floored with cobbles, and result from the swirling motion of these cobbles in the surf zone. 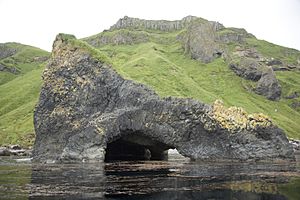 True littoral caves should not be confused with inland caves that have been intersected and revealed when a sea cliff line is eroded back, or with dissolutional voids formed in the littoral zone on tropical islands. In some regions, such as Halong Bay, Vietnam, caves in carbonate rocks are found in littoral zones, and being enlarged by littoral processes but were originally formed by dissolution. Such caves have been termed as hybrid caves.

Rainwater may also influence sea-cave formation. Carbonic and organic acids leached from the soil may assist in weakening rock within fissures. As in solutional caves, small speleothems may develop in sea caves.

Sea cave chambers sometimes collapse leaving a “littoral sinkhole”. These may be quite large, such as Oregon’s Devil’s Punchbowl or the Queen’s Bath on the Na Pali coast. Small peninsulas or headlands often have caves that cut completely through them, since they are subject to attack from both sides, and the collapse of a sea cave tunnel can leave a free-standing “sea stack” along the coast. The Californian island of Anacapa is thought to have been split into three islets by such a process.

Life within sea caves may assist in their enlargement as well. For example, sea urchins drill their way into the rock, and over successive generations may remove considerable bedrock from the floors and lower walls.

All content from Kiddle encyclopedia articles (including the article images and facts) can be freely used under Attribution-ShareAlike license, unless stated otherwise. Cite this article:
Sea cave Facts for Kids. Kiddle Encyclopedia.