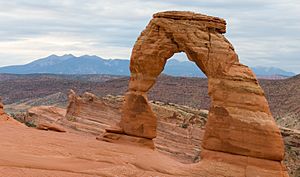 A natural arch is a natural rock formation where an arch has formed with an opening under the arch. It is also called a natural bridge, or (less commonly) rock arch. Natural arches commonly form where inland cliffs, coastal cliffs, fins or stacks are eroded by the sea, rivers or weathering.

Most natural arches are formed from narrow fins and sea stacks that is made up of sandstone or limestone.

All content from Kiddle encyclopedia articles (including the article images and facts) can be freely used under Attribution-ShareAlike license, unless stated otherwise. Cite this article:
Natural arch Facts for Kids. Kiddle Encyclopedia.