Arches National Park is a national park in eastern Utah, United States. The park is adjacent to the Colorado River, 4 miles (6 km) north of Moab, Utah. More than 2,000 natural sandstone arches are located in the park, including the well-known Delicate Arch, as well as a variety of unique geological resources and formations. The park contains the highest density of natural arches in the world.

Administered by the National Park Service, the area was originally named a national monument on April 12, 1929, and was redesignated as a national park on November 12, 1971. The park received more than 1.6 million visitors in 2018. 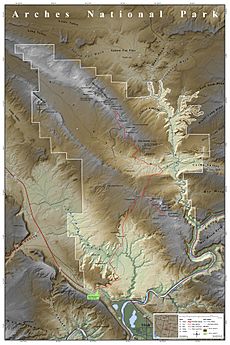 The national park lies above an underground evaporite layer or salt bed, which is the main cause of the formation of the arches, spires, balanced rocks, sandstone fins, and eroded monoliths in the area. This salt bed is thousands of feet thick in places, and was deposited in the Paradox Basin of the Colorado Plateau some 300 million years ago (Mya) when a sea flowed into the region and eventually evaporated. Over millions of years, the salt bed was covered with debris eroded from the Uncompahgre Uplift to the northeast. During the Early Jurassic (about 210 Mya), desert conditions prevailed in the region and the vast Navajo Sandstone was deposited. An additional sequence of stream-laid and windblown sediments, the Entrada Sandstone (about 140 Mya), was deposited on top of the Navajo. Over 5,000 feet (1,500 m) of younger sediments were deposited and have been mostly eroded away. Remnants of the cover exist in the area including exposures of the Cretaceous Mancos Shale. The arches of the area are developed mostly within the Entrada formation.

The weight of this cover caused the salt bed below it to liquefy and thrust up layers of rock into salt domes. The evaporites of the area formed more unusual "salt anticlines" or linear regions of uplift. Faulting occurred and whole sections of rock subsided into the areas between the domes. In some places, they turned almost on edge. The result of one such 2,500-foot (760 m) displacement, the Moab Fault, is seen from the visitor center.

As this subsurface movement of salt shaped the landscape, erosion removed the younger rock layers from the surface. Except for isolated remnants, the major formations visible in the park today are the salmon-colored Entrada Sandstone, in which most of the arches form, and the buff-colored Navajo Sandstone. These are visible in layer-cake fashion throughout most of the park. Over time, water seeped into the surface cracks, joints, and folds of these layers. Ice formed in the fissures, expanding and putting pressure on surrounding rock, breaking off bits and pieces. Winds later cleaned out the loose particles. A series of free-standing fins remained. Wind and water attacked these fins until, in some, the cementing material gave way and chunks of rock tumbled out. Many damaged fins collapsed. Others, with the right degree of hardness and balance, survived despite their missing sections. These became the famous arches.

Although the park's terrain may appear rugged and durable, it is extremely fragile. More than 1 million visitors each year threaten the fragile high-desert ecosystem. The problem lies within the soil's crust, which is composed of cyanobacteria, algae, fungi, and lichens that grow in the dusty parts of the park. Factors that make Arches National Park sensitive to visitor damage include being a semiarid region, the scarce, unpredictable rainfall, lack of deep freezing, and lack of plant litter, which results in soils that have both a low resistance to, and slow recovery from, compressional forces such as foot traffic. Methods of indicating effects on the soil are cytophobic soil crust index, measuring of water infiltration, and t-tests that are used to compare the values from the undisturbed and disturbed areas. 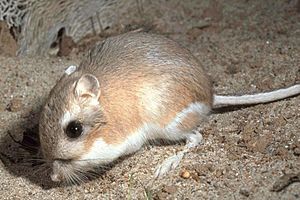 Among the notable features of the park are: 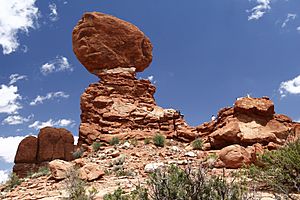 All content from Kiddle encyclopedia articles (including the article images and facts) can be freely used under Attribution-ShareAlike license, unless stated otherwise. Cite this article:
Arches National Park Facts for Kids. Kiddle Encyclopedia.