The cougar (Puma concolor), also commonly known as the puma, mountain lion, panther or catamount, is a large felid of the subfamily Felinae native to the Americas. Its range, from the Canadian Yukon to the southern Andes of South America, is the widest of any large wild terrestrial mammal in the Western Hemisphere.

An adaptable, generalist species, the cougar is found in most American habitat types. It is the biggest cat in North America, and the second-heaviest cat in the New World after the jaguar. Secretive and largely solitary by nature, the cougar is properly considered both nocturnal and crepuscular, although daytime sightings do occur. The cougar is more closely related to smaller felines, including the domestic cat. 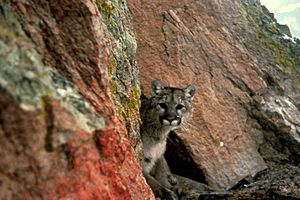 Pumas are mainly tan-coloured, and can be up to 9 feet long although average length is 6 – 8 feet. They can weigh from 29 kilograms to 90 kilograms. (The males are larger.) The head of the cat is round and the ears are erect. Its powerful forequarters, neck, and jaw serve to grasp and hold large prey. It has five retractable claws on its fore-paws (one a dewclaw) and four on its hind paws. The larger front feet and claws are adaptations to clutching prey. It is adept at climbing, which allows it to evade canine competitors. Although it is not strongly associated with water, it can swim.

The cougar is on average larger than all felid species apart from the lion, tiger, and jaguar. Despite its size, it is not typically classified among the "big cats" because it cannot roar. Cougars sometimes voice low-pitched hisses, growls, and purrs, as well as chirps and whistles, many of which are comparable to those of domestic cats. They are well known for their screams. 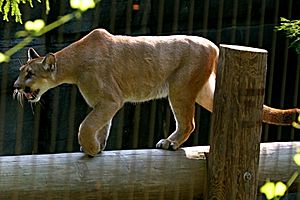 Puma at the Memphis zoo

Like almost all cats, the cougar is a mostly solitary animal. Only mothers and kittens live in groups, with adults meeting rarely. While generally loners, cougars will share kills with one another and seem to organize themselves into small communities defined by the territories of dominant males. Cats within these areas socialize more frequently with each other than with outsiders.

When males encounter each other, they hiss, spit, and may engage in violent conflict if neither backs down. 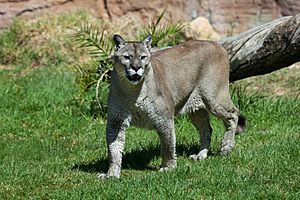 Pumas are carnivores because they eat only meat. They hunt deer, raccoons, squirrels, foxes, rabbits and skunks. They can also eat, beavers, coyotes, birds and porcupines. It also hunts species as small as insects and rodents. Cougars can see better at night, so this is when they hunt, they also have very acute hearing. The cougar is an ambush predator, they stalk their prey, that is, they walk slowly and quietly, they hide and then when close, they jump or run fast to catch the animal. They live and hunt alone. This cat prefers habitats with dense underbrush and rocky areas for stalking, but can also live in open areas. 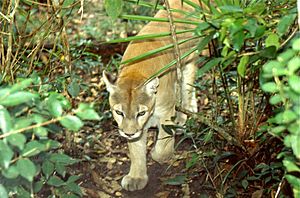 Cougars live in the mountains and forests far from people. However, encounters with humans do happen sometimes. Cougars have been known to attack humans. 26 people have been killed by cougars in North America in the last 30 years. Cougars used to be found all over eastern North America until they were hunted to extinction there by the beginning of the 1900's. However, recent sightings of cougars have been reported from Michigan, New Brunswick, southern Indiana, Kentucky, and Vermont. For now, the only confirmed, population of cougars east of the Mississippi River is in Florida, where a subspecies of the cougar called the Florida Panther lives.

With the increase of human development and infrastructure growth in California, the North American Cougar populations are becoming more isolated from one another.

These are good safety ideas for areas where pumas live: 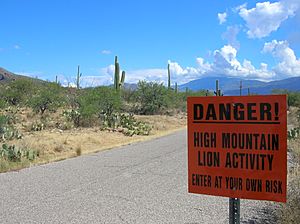 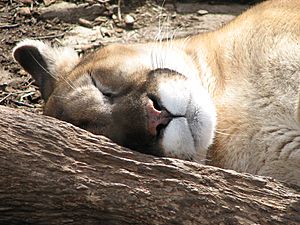 Females average one litter every two to three years throughout their lives, though the period can be as short as one year. The gestation period is approximately 91 days. Only females are involved in parenting. Litter size is between one and six cubs; typically two. Caves and other alcoves that offer protection are used as litter dens.

Born blind, cubs are completely dependent on their mother at first, and begin to be weaned at around three months of age. As they grow, they begin to go out on forays with their mother, first visiting kill sites, and after six months beginning to hunt small prey on their own. Kitten survival rates are just over one per litter. Newborn cougars have spots that fade and eventually disappear by the age of 2 1/2 years. Juveniles remain with their mothers at least for two years. Young adults leave their mother to attempt to establish their own territories at around two years of age and sometimes earlier; males tend to leave sooner.

Life expectancy in the wild is reported at eight to 13 years. Cougars may live as long as 20 years in captivity. A male North American cougar named "Scratch" was two months short of his 30th birthday when he died in 2007. Causes of death in the wild include disability and disease, competition with other cougars, starvation, accidents, and, where allowed, human hunting.

All content from Kiddle encyclopedia articles (including the article images and facts) can be freely used under Attribution-ShareAlike license, unless stated otherwise. Cite this article:
Puma Facts for Kids. Kiddle Encyclopedia.