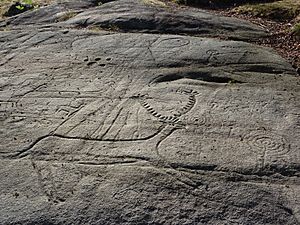 Petroglyphs are images created by removing part of a rock surface by incising, picking, carving, or abrading, as a form of rock art.

Outside North America, scholars often use terms such as "carving", "engraving", or other descriptions of the technique to refer to such images. Petroglyphs are found worldwide, and are often associated with prehistoric peoples.

The word comes from the Greek prefix petro-, from πέτρα petra meaning "stone", and γλύφω glýphō meaning "to carve", and was originally coined in French as pétroglyphe.

All content from Kiddle encyclopedia articles (including the article images and facts) can be freely used under Attribution-ShareAlike license, unless stated otherwise. Cite this article:
Petroglyph Facts for Kids. Kiddle Encyclopedia.