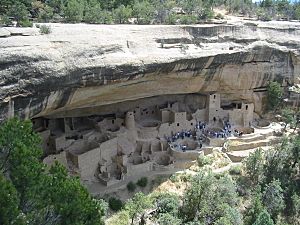 Cliff Palace, a cliff dwelling built by the Ancestral Puebloans. It is in the Mesa Verde National Park in Colorado

The Ancestral Puebloans were an ancient Native American culture that lived in what is today the southeastern United States. Their settlements were in the present states of Colorado, Utah, Arizona and New Mexico. Their culture ceased about 1600 AD. They were called the Anasazi by the Navajos.

Their people left remains of some large and important places. Two of these have been classified as UNESCO World Heritage Sites. Remains found by archaeologists show knowledge of pottery, weaving and irrigation. They also drew symbols.

All content from Kiddle encyclopedia articles (including the article images and facts) can be freely used under Attribution-ShareAlike license, unless stated otherwise. Cite this article:
Ancestral Puebloans Facts for Kids. Kiddle Encyclopedia.