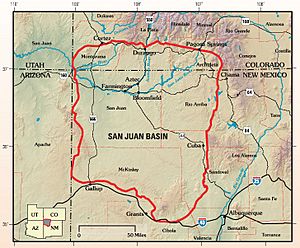 The San Juan structural basin is primarily in New Mexico and the southeast corner of the Colorado Plateau. 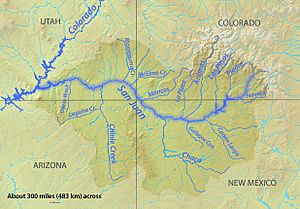 The San Juan structural basin is generally the east portion of the San Juan River Watershed of 24,600 sq mi (64,000 km2) which extends farther west into Utah and Arizona.

The San Juan Basin is a geologic structural basin located near the Four Corners region of the Southwestern United States. The basin covers 7,500 square miles and resides in northwestern New Mexico, southwestern Colorado, and parts of Utah and Arizona. Specifically, the basin occupies space in the San Juan, Rio Arriba, Sandoval, and McKinley counties in New Mexico, and La Plata and Archuleta counties in Colorado. The basin extends roughly 100 miles N-S and 90 miles E-W. 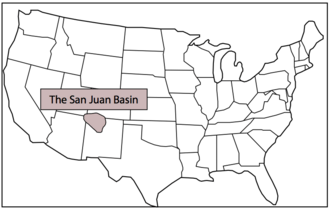 Location of the San Juan Basin on a map of the United States.

The San Juan Basin is an asymmetric structural depression in the Colorado Plateau province, with varying elevation and nearly 3,000' in topographic relief. Its most striking features include Chaco Canyon (northwestern New Mexico, between Farmington and Santa Fe) and Chacra Mesa. The basin lies west of the Continental Divide, and its main drainage is the southwest- to west-flowing San Juan River, which eventually joins the Colorado River in Utah. Climate of the basin is arid to semiarid, with an annual precipitation of 15 inches and an average annual temperature of around 50 degrees Fahrenheit.

The San Juan Basin has been a major producer of oil and natural gas since the early 20th century, with currently more than 300 oil fields and over 40,000 drilled wells throughout the area. As of 2009, cumulative production reached 42.6 trillion cubic feet of gas and 381 million barrels of oil. The area is especially known for gas reservoirs from its coal-bed methane formations. The San Juan Basin contains the largest coal-bed methane field in the world and ranks second in total gas reserves.

During the mid-Paleozoic, the San Juan Basin was part of the ancient landmass called Laurentia; this was a supercontinent that contained much of current-day North America. The ancient landmass called Gondwana contained most of the southern continents, e.g. South America and Africa. During the late-Mississippian (~320 million years ago), the landmasses of Laurentia and Gondwana collided to form the giant landmass of Pangea. This continental collision resulted in several pivotal orogenic (mountain building) episodes.

During the late Jurassic, continental collision of the Farallon and North American plates resulted in low-angle ("flat slab") subduction beneath the western margin of the United States. Pressure on the underlying lithosphere resulting in a "depression" of the continents interior, and this allowed for the formation of the Inner Cretaceous Seaway (a.k.a. Western Interior Seaway). This began the transition from terrestrial sedimentation during the late Paleozoic and early Mesozoic to a shallow marine basin, as waters from the Arctic and Gulf regions poured into the center of the continent.

During late-Cretaceous to early-Tertiary, compressional forces (continued subduction of the Farallon Plate) continued to act and caused the uplift of the modern Rocky Mountains via the Laramide Orogeny. Early-Tertiary tilting towards the northwest resulted in over 2,000' of erosion in the southeast. As compression shifted to extension and the formation of the Rio Grande Rift began, volcanism dominated the area throughout much of the Eocene and Oligocene. Uplift in the northwest and continued deposition brought the basin to its current-day configuration.

The San Juan Basin is an asymmetrical syncline with three components: the Central Basin Platform, the Four Corners Platform, and the Chaco Slope (a.k.a. the Chaco Homocline). The basin is bound on the northwest by the Hogback Monocline (separating the Central Basin and Four Corners platforms), on the northeast by the Archuleta Anticlinorium, on the east by the Nacimiento Uplift, and on the south by the Zuni Uplift.

Prior to collision, Mississippian- and Pennsylvanian-aged units were deposited during various marine environments, e.g. the Leadville Limestone and the Pinkerton Trail Formations. Once the supercontinents collided (see Tectonic Evolution above), the subsidence of the Paradox Basin and the uplift of the Uncompahgre highlands allowed for enormous amounts of sediment to shed of the highlands via Permian fluvial systems.The Rico Formation is represents the transition from Pennsylvanian marine deposits to Permian terrestrial deposits of the Cutler Formation. The Permian continued to be a time of terrestrial deposits, including late-Permian eolian deposits.

The Cretaceous was a time of three major transgressive-regressive cycles, as eustatic changes in sea-level caused fluctuations on the Western Interior Seaway's shoreline. The San Juan Basin was conveniently located in the western margin of the seaway and recorded these cycles in the stratigraphy (see Stratigraphy below). The western-most extent of the seaway (a.k.a. maximum transgression) was recorded by the Lewis Shale, which eventually graded into the Pictured Cliffs and the Fruitland Formation as the shoreline made its final retreat.

The Western Interior Seaway's shoreline regression resulted in ample swamps, lakes, and flood plains; this resulted in the coal-rich formations of the late Mesozoic/early Cenozoic (e.g. Fruitland Formation and the Kirtland Shale). Eocene/Oligocene volcanism resulted in large volcanic aprons that covered 1000's of square-kilometers, and these volcanic fields sourced the Cenozoic units the Ojo Alamo (sourced from the west), and the Animas and Nacimiento formations (sourced from the northeast). Uplift in the northwest (and subsequent erosion), and continued deposition (e.g. the San Jose Formation) brought the basin to its current-day configuration.

Little is known about Precambrian units due to poor outcrop exposure and poor well-control. Precambrian rocks consist of quartzite, schist, and granite, and rocks are overlain unconformably by younger Paleozoic units.

Little is known about the stratigraphy of the Paleozoic. Of the >40,000 wells drilled in the San Juan Basin, only about 12 have penetrated deep enough to come in contact with Paleozoic units. Additionally, poor outcrop exposure and lateral facies changes complicate the defining and correlation of these units.

The Cretaceous-aged units are the most well-understood and the most productive units in the San Juan Basin. The Inner Cretaceous Seaway's western extent was along the San Juan Basin, and the three major transgressive-regressive episodes that occurred during this time are recorded in the mid- to upper-Cretaceous stratigraphy.

The San Juan Basin contains ample fuel resources, including oil, gas, coal, and uranium. The basin has produced from over 300 oil fields and nearly 40,000 wells, most of which are sourced from Cretaceous-aged rocks. Furthermore, 90% of the wells have been drilled in the state of New Mexico. As of 2009, cumulative production reached 42.6 trillion cubic feet of gas and 381 million barrels of oil.

The first documented oil play in the San Juan Basin occurred in 1911 on the Chaco Slope. The well was drilled to a depth of 100 m and produced only 12 barrels of oil per day. The first documented gas play occurred ten years later in the Central Basin Platform. The well was 300 m deep and resulted in a gas pipeline to carry and market gas to nearby cities. The following years resulted in many oil and gas discoveries that subsequently spiked interest in San Juan resources. The 1930s brought upon the first pipeline to transport gas outside of the basin. The 1980s brought upon the discovery of the coal-bed methane resources, resulting in a drilling spike during the 1980s and 1990s. Production has since leveled out, but the basin is still actively producing today.

While the majority of production has occurred in Cretaceous-aged units, the Paleozoic rocks of the Four Corners Platform have successfully produced from over two-dozen fields from Devonian, Mississippian, and Pennsylvanian-aged units. The Paleozoic units deepen in a northeast direction where they cross from the oil- to the gas-window; subsequently, Paleozoic fields yield gas in the northeast and oil in the southwest. Furthermore, Paleozoic field locations roughly align with the northeast-trending Hogback monocline. Future Paleozoic plays will target natural gas, and these will include untested carbonates in the Central Basin Platform and potentially undiscovered plays in the Four Corners Platform.

In 2014 NASA researchers reported the discovery of a 2,500 square miles (6,500 km2) methane cloud floating over the Basin. The discovery was based on data from the European Space Agency’s Scanning Imaging Absorption Spectrometer for Atmospheric Chartography instrument from 2002 to 2012.

The report concluded that “the source is likely from established gas, coal, and coalbed methane mining and processing.” The region emitted 590,000 metric tons of methane every year between 2002 and 2012—almost 3.5 times the widely used estimates in the European Union’s Emissions Database for Global Atmospheric Research.

All content from Kiddle encyclopedia articles (including the article images and facts) can be freely used under Attribution-ShareAlike license, unless stated otherwise. Cite this article:
San Juan Basin Facts for Kids. Kiddle Encyclopedia.