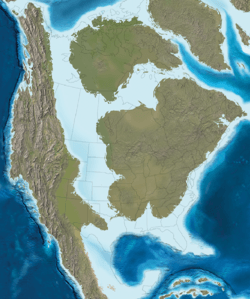 Paleogeography of the Campanian

The Fruitland Formation is a geologic formation found in the San Juan Basin in the states of New Mexico and Colorado, in the United States of America. It contains fossils dating it to the Campanian age of the late Cretaceous. 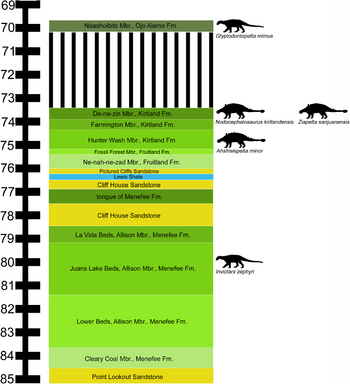 The Fruitland Formation is a sedimentary geological formation containing layers of sandstone, shale, and coal. It was laid down in marshy delta conditions, with poor drainage and frequent flooding, under a warm, humid and seasonal climate.

The Fruitland is underlain by the Pictured Cliffs Sandstone, and overlain by the more recent Kirtland Formation. The sequence of rocks represents the final filling of the Cretaceous seaway. The underlying Pictured Cliffs is a marginal marine sandstone, deposited in an environment similar to offshore barrier islands of the southeast United States. As the seaway retreated, the Pictured Cliffs was covered by the Fruitland Formation, which was deposited in near-shore swampy lowlands. The formation is dated to the late Campanian (part of the Cretaceous period), and was deposited over a period of about a million years. Radiometric dating from 23 meters above the base of the formation has yielded an age of 76.03 ± 0.41 Ma ago. An ash bed lying above the upper boundary with the Kirtland Formation has been dated to 75.02 ± 0.13 Ma ago. The underlying Pictured Cliffs Sandstone would be dated 76.94 - 76.27 Ma, based on the presence of the ammonite Baculites scotti, therefore placing the base of the Fruitland Formation at ~76.3 Ma.

Some remains (OMNH 10131) of Bistahieversor may actually have originated in the upper Fruitland Formation.

The methane released from the Fruitland Formation, through oil and gas production and a bit of natural seepage, contributes to the Four Corners Methane Hot Spot.

All content from Kiddle encyclopedia articles (including the article images and facts) can be freely used under Attribution-ShareAlike license, unless stated otherwise. Cite this article:
Fruitland Formation Facts for Kids. Kiddle Encyclopedia.