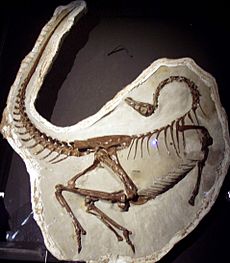 skull of a similar genus

Ornithomimus had three toes on each foot, long arms and neck, but a small head. It also had claws on each hand and foot. It had no teeth and weak jaws, which might mean it was omnivorous.

Ornithomimus edmonticus was the largest species, 12 ft (3.5 meters) long, 7 feet (2.10 meters) high and weighed about 100-150 kg. It walked on two legs and looked slightly like an ostrich, except for its long tail.

There has been trouble with naming. Some speciments are put in other genera, like Dromiceiomimus and Struthiomimus.

In 1995, 2008 and 2009, three O. edmontonicus specimens with evidence of feathers were found. Two adults had quill knobs on the lower arm, indicating the former presence of bird-like feather shafts. A juvenile had impressions of long fluffy feathers in the form of hair-like filaments covering the rump, legs and neck.

The feather imprints were found in sandstone, previously thought to not be able to support such impressions.

All content from Kiddle encyclopedia articles (including the article images and facts) can be freely used under Attribution-ShareAlike license, unless stated otherwise. Cite this article:
Ornithomimus Facts for Kids. Kiddle Encyclopedia.