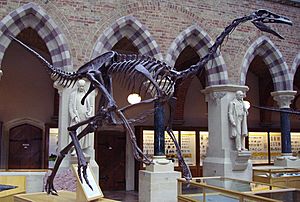 Struthiomimus was a long-legged, ostrich-like dinosaur of the ornithomimid family. It lived in what is now Alberta, Canada, during the Upper Cretaceous, about 75 to 65 million years ago. 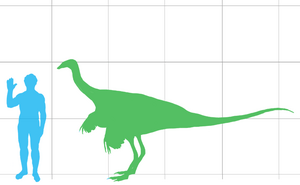 Size of the largest known S. altus specimen compared to a human

Struthiomimus had a typical build and skeletal structure for an ornithomimid, differing from genera like Ornithomimus in proportions and anatomical details. It is known from several skeletons and skulls, and its size is estimated as about 4.3 metres (14 ft) long and 1.4 metres (4.6 ft) tall at the hips, with a weight of around 150 kilograms (330 lb).

As with other ornithomimids, it had a small slender head on a long neck (which made up about 40% of the length of the body in front of the hips).

Its eyes were large and its jaws were toothless.

Its vertebral column had ten neck vertebrae, thirteen back vertebrae, six hip vertebrae, and about thirty-five tail vertebrae. The tail was stiff and was probably used for balance.

All content from Kiddle encyclopedia articles (including the article images and facts) can be freely used under Attribution-ShareAlike license, unless stated otherwise. Cite this article:
Struthiomimus Facts for Kids. Kiddle Encyclopedia.