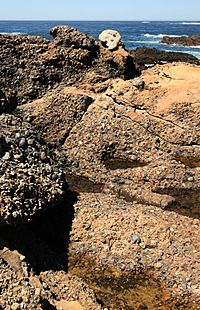 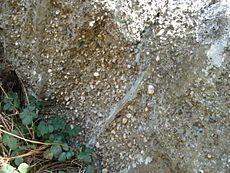 A conglomerate is a rock consisting of individual clasts within a finer-grained matrix that have become cemented together.

Conglomerates are sedimentary rocks consisting of rounded fragments and are thus differentiated from breccias, which consist of angular clasts. Both conglomerates and breccias have clasts larger than sand (>2 mm).

All content from Kiddle encyclopedia articles (including the article images and facts) can be freely used under Attribution-ShareAlike license, unless stated otherwise. Cite this article:
Conglomerate (geology) Facts for Kids. Kiddle Encyclopedia.