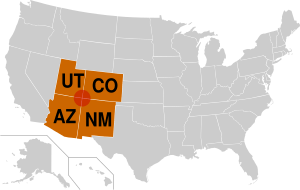 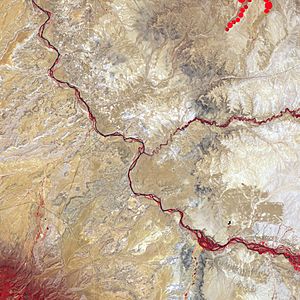 False-color satellite image of the Four Corners. Bright red lines are vegetation along the major rivers of the area. 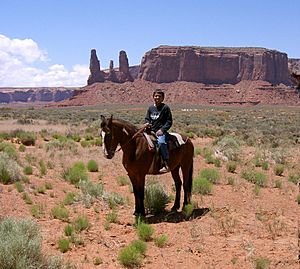 A young Navajo boy on horseback in Monument Valley. The Navajo Nation includes much of the Four Corners area, including the valley, used in many western movies. 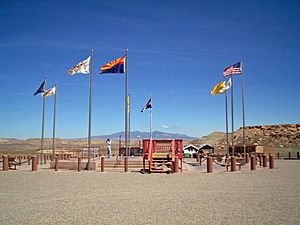 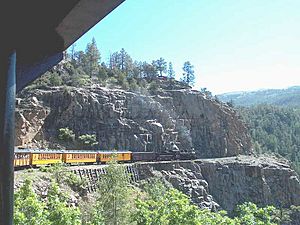 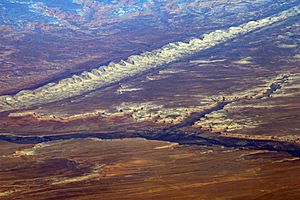 Bluff, Utah and Comb Ridge from the air.

The United States acquired the four corners region from Mexico after the end of the Mexican–American War in 1848. In 1863 Congress created the Arizona Territory from the western part of New Mexico Territory. The boundary was legally defined as a line running due south from the southwest corner of Colorado Territory, which had been created in 1861. This was an unusual act of Congress, which almost always defined the boundaries of new territories as lines of latitude or longitude, or following rivers, but seldom as extensions of other boundaries.

By defining one boundary as starting at the corner of another, Congress ensured the eventual creation of four states meeting at a point, regardless of the inevitable errors of boundary surveying. Due to a "standard" survey error of the time, the originally surveyed location of the location of the "Four Corners" point was unintentionally located by its initial surveyor as being 1,821' East of the original location actually specified by the US Congress in 1863. The area was first surveyed by the U.S. Government in 1868 as part of an effort to make Colorado Territory into a state, the first of the Four Corners states formed.

The first marker was placed at the originally surveyed and current spot in 1868. In 1925, some 57 years after Congress had first attempted to specify the spot, the problems surrounding the originally misplaced marker were brought up before the US Supreme Court. In order to amicably remedy this original surveying error, the US Supreme Court then redefined the point of the Four Corners, officially moving the Four Corners point roughly 1,800' East, to where the original survey had first held it to be all along, and to where it remains to this day, duly marked. This initial survey-error has resulted in some longstanding misunderstandings about the correct location of the Four Corners marker, some of which remain to this day.

The first Navajo tribal government was established in 1923 to regulate an increasing number of oil exploration activities on Navajo land.

The Four Corners is part of the high Colorado Plateau. This makes it a center for weather systems, which stabilize on the plateau then proceed eastward through Colorado and into the central states. This weather system creates snow and rain fall over the central United States.

The Four Corners region is mostly rural. The economic hub, largest city, and only metropolitan area in the region is Farmington, New Mexico. The populated settlement closest to the center of Four Corners is Teec Nos Pos, Arizona. Other cities in the region include Cortez and Durango in Colorado; Monticello and Blanding in Utah; Kayenta and Chinle in Arizona; and Shiprock, Aztec, and Bloomfield in New Mexico.

The main line of the Atchison, Topeka and Santa Fe Railway, now operated by the BNSF Railway, passes along the southern edge of Four Corners. The area is home to remnants of through railroads that are now heritage railways. These include the Durango and Silverton Narrow Gauge Railroad and the Cumbres and Toltec Scenic Railroad. The Black Mesa and Lake Powell Railroad, which connects a power plant with a coal mine near Kayenta, comes near the Four Corners.

All content from Kiddle encyclopedia articles (including the article images and facts) can be freely used under Attribution-ShareAlike license, unless stated otherwise. Cite this article:
Four Corners Facts for Kids. Kiddle Encyclopedia.