Chinle (Navajo: Chʼínílį́) is a census-designated place (CDP) in Apache County, Arizona, United States. The name in Navajo means "flowing out" and is a reference to the location where the water flows out of the Canyon de Chelly. The population was 4,518 at the 2010 census.

There were 1,358 households out of which 52.8% had children under the age of 18 living with them, 42.6% were married couples living together, 30.4% had a female householder with no husband present, and 20.7% were non-families. 18.3% of all households were made up of individuals and 2.5% had someone living alone who was 65 years of age or older. The average household size was 3.84 and the average family size was 4.43.

After a period of use for trade and war by the Spanish, Chinle was the site of the 1864 peace conference between Kit Carson and the Navajo people that ended the war between the Navajo and the U.S. The first trading post (only a tent at the time) was established here in 1882. This grew to a full-sized camp by 1885. A government school was established in 1910.

Initially anglicized as Chin Lee, the name was changed to Chinle on April 1, 1941.

Chinle serves as a gateway community for Canyon de Chelly National Monument, established in 1931 primarily to preserve the archaeological sites and record of human history. Canyon de Chelly AZ is unique among the National Park Service units because the park is located entirely on Navajo tribal land and has a residential canyon community. 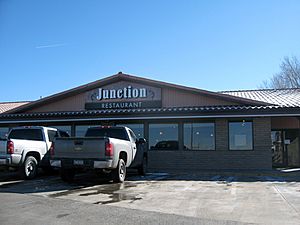 The Junction Restaurant in Chinle

Chinle is the home of several sit-down and fast food restaurants, most of which are located on the US 191 and Indian Route 7 that run through town. In terms of fast food, Chinle has a Burger King, Subway, Church's Chicken, and Pizza Edge. Serving American and some traditional Navajo foods, there are the Junction Restaurant at the Best Western; Garcia's Restaurant at the Holiday Inn; and Thunderbird Lodge Cafeteria at the Thunderbird Lodge. The King Dragon Restaurant serves Chinese cuisine.

Groceries and other Services

Native craft and souvenir items can be found at the motel gift shops or at the Navajo Arts and Crafts outlet at the junction of 191 and Route 7. A Visitor Center and bookstore are located at Canyon de Chelly National Monument.

Chinle has a large community center dedicated to serving the local community. Next to it is the Wildcat Den, a large sports complex where high school basketball games are played. The excellent swimming pool complex at the high school also serves the community with open swim time and lap swimming for a small fee. 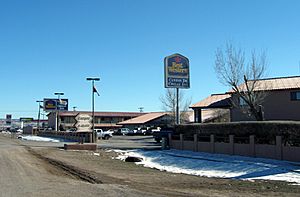 Camping is offered for a fee at the Cottonwood Campground managed by the Navajo Nation, which features 90 sites, restroom facilities, dumpstation and potable water. No RV parks with utilities are available in town.

Several Federal, County and Navajo tribal agencies are located in town. The local government is located at the Chinle Chapter House. The Chapter House serves as a town hall with a Chapter President, Vice President and Secretary/Treasurer as elected officials.

All content from Kiddle encyclopedia articles (including the article images and facts) can be freely used under Attribution-ShareAlike license, unless stated otherwise. Cite this article:
Chinle, Arizona Facts for Kids. Kiddle Encyclopedia.