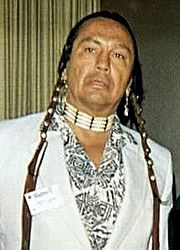 Russell Charles Means (November 10, 1939 – October 22, 2012) was an American Oglala Sioux activist, writer, politician, musician, television and movie actor who is known for his activisim to the American Indian Movement. He is also known for his roles in Pathfinder, Thomas and the Magic Railroad and in Pocahontas.

In 1983 he agreed to become running mate to Larry Flynt in his unsuccessful run for U.S. President.

All content from Kiddle encyclopedia articles (including the article images and facts) can be freely used under Attribution-ShareAlike license, unless stated otherwise. Cite this article:
Russell Means Facts for Kids. Kiddle Encyclopedia.