Crazy Horse, literally "His-Horse-Is-Crazy"; was a Native American war leader of the Oglala Lakota in the 19th century. He took up arms against the United States federal government to fight against the take-over by white American settlers on Indian territory and to preserve the traditional way of life of the Lakota people.

His participation in several famous battles of the American Indian Wars on the northern Great Plains, among them the Fetterman massacre in 1866, in which he acted as a decoy, and the Battle of the Little Bighorn in 1876, in which he led a war party to victory, earned him great respect from both his enemies and his own people.

In September 1877, four months after surrendering to U.S. troops under General George Crook, Crazy Horse was fatally wounded by a bayonet-wielding military guard, while allegedly resisting imprisonment at Camp Robinson in present-day Nebraska. He ranks among the most notable and iconic of Native American warriors and was honored by the U.S. Postal Service in 1982 with a 13¢ Great Americans series postage stamp. 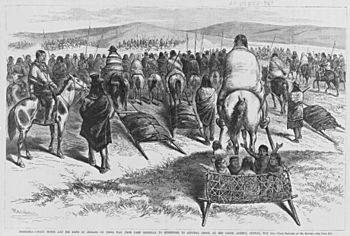 Crazy Horse and his band of Oglala on their way from Camp Sheridan to surrender to General Crook at Red Cloud Agency, Sunday, May 6, 1877 / Berghavy ; from sketches by Mr. Hottes.

Sources differ on the precise year of Crazy Horse's birth, but most agree he was born between 1840 and 1845. Crazy Horse was born to parents from two tribes of the Lakota division of the Sioux.

His father, born in 1810, was also named Crazy Horse. Crazy Horse was named Cha-O-Ha ("In the Wilderness" or "Among the Trees") at birth, meaning he was one with nature. His mother, Rattling Blanket Woman (born 1814), gave him the nickname "Curly" or "Light Hair", as his light curly hair resembled her own. She died when Crazy Horse was only four years old.

Crazy Horse was known to have a personality characterized by aloofness, shyness, modesty and lonesomeness. He was generous to the poor, the elderly, and children.

Through the late 1850s and early 1860s, Crazy Horse's reputation as a warrior grew, as did his fame among the Lakota. The Lakota told accounts of him in their oral histories.

Crazy Horse is currently being commemorated with the Crazy Horse Memorial in South Dakota, a monument carved into a mountain, in the tradition of Mount Rushmore.

There is much debate over the authenticity of the picture that is claimed to be Crazy Horse. He resisted being photographed during his life because he had strong beliefs in preserving the culture and ways of the traditional Native Americans.

All content from Kiddle encyclopedia articles (including the article images and facts) can be freely used under Attribution-ShareAlike license, unless stated otherwise. Cite this article:
Crazy Horse Facts for Kids. Kiddle Encyclopedia.