Battle of the Little Bighorn facts for kids

The Battle of Little Bighorn, known to the Lakota and other Plains Indians as the Battle of the Greasy Grass and also commonly referred to as Custer's Last Stand, was an armed engagement between combined forces of the Lakota, Northern Cheyenne, and Arapaho tribes and the 7th Cavalry Regiment of the United States Army. The battle, which resulted in the defeat of U.S. forces, was the most significant action of the Great Sioux War of 1876. It took place on June 25–26, 1876, along the Little Bighorn River in the Crow Indian Reservation in southeastern Montana Territory.

The fight was an overwhelming victory for the Lakota, Northern Cheyenne, and Arapaho, who were led by several major war leaders, including Crazy Horse and Chief Gall, and had been inspired by the visions of Sitting Bull (Tȟatȟáŋka Íyotake).

The U.S. 7th Cavalry, a force of 700 men, suffered a major defeat while under the command of Lieutenant Colonel George Armstrong Custer (formerly a brevetted major general during the American Civil War). Five of the 7th Cavalry's twelve companies were annihilated and Custer was killed, as were two of his brothers, a nephew and a brother-in-law. The total U.S. casualty count included 268 dead and 55 severely wounded (six died later from their wounds), including four Crow Indian scouts and at least two Arikara Indian scouts.

Little Bighorn Battlefield National Monument honors those who fought on both sides. 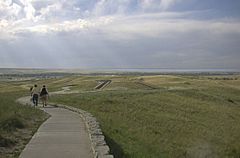 Forces from the Army were sent to attack the Native Americans based on Indian Inspector E.C. Watkins' report (issued on November 9, 1875) that claimed that hundreds of Lakota and Northern Cheyenne associated with Sitting Bull and Crazy Horse were hostile to the United States. Federal interest in Indian lands (including the gold-rich Black Hills) also played an important role.

Thousands of Indians had slipped away from their reservations. Military officials planned a three-pronged expedition to corral them and force them back to the reservations. Brig. Gen. George Crook moved north from Fort Fetterman in Wyoming toward the Powder River area. Col. John Gibbon's infantry and a battery of Gatling guns marched east from Fort Ellis in western Montana. The third column under Brig. Gen. Alfred Terry, including Custer's 7th Cavalry, departed westward from Fort Abraham Lincoln in the Dakota Territory. 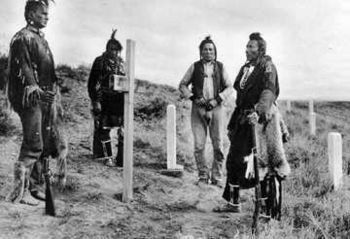 Crow Indian scouts reported to Custer the presence of what was judged a very large encampment of Indians. Despite this warning, on June 25, Custer divided his regiment into four commands and moved forward to attack the encamped Indians, who were expected to flee at the first sign of attack. The first battalion to attack was commanded by Major Marcus Reno and preceded by about a dozen Arikara and friendly Sioux scouts. His orders, given by Custer without accurate knowledge of the village's size, location, or propensity to stand and fight, were to pursue the Indians and "bring them to battle." However, Custer did promise to "support...[Reno] with the whole outfit." Reno's force crossed the Little Bighorn at the mouth of what is today called Reno Creek, and immediately realized that the Lakota and Northern Cheyenne were present "in force and ...not running away."

Sending a message to Custer, but hearing nothing in return, Reno launched his offensive northward. He stopped a few hundred yards short of the village, however, and dismounted, unwilling to attack the enormous village with his roughly 125 men. In about 20 minutes of long distance firing, he had taken only one casualty, but the odds against him had become more obvious, and Custer had not reinforced him. Reno ordered a retreat to nearby woods, and then made a disorderly withdrawal to the river and up to the top of the bluffs on the other side, suffering heavy casualties along the way. Reno was at the head of this movement and called it a charge; however, no bugle calls were heard, and a number of men were left in the woods. The river crossing was unguarded, and a number of men died there.

At the top of the bluffs, Reno's shaken troops soon were met by a battalion commanded by Captain Frederick Benteen This force had been on a lateral scouting mission, and had been summoned by Custer to "Come on...big village, be quick...bring pacs..." Benteen's coincidental arrival on the bluffs was just in time to save Reno's men from annihilation. This combined force was then reinforced by a smaller command escorting the expedition's pack train. Benteen did not continue on towards Custer for at least an hour, despite hearing heavy gunfire from the north. Benteen's inactivity prompted later criticism that he had failed to follow orders. 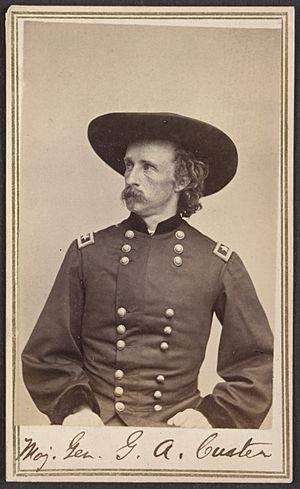 The gunfire heard on the bluffs (by everyone except Reno and Benteen) was from Custer's fight. His 210 men engaged the Lakota and Northern Cheyenne (or had been engaged by them) some 3.5 miles (6 km) to the north. Having driven Reno's force, if not into oblivion, at least into chaos, the warriors were free to pursue Custer. The route taken by Custer to his "Last Stand" has been a subject of debate. It does seem clear that after ordering Reno to charge, Custer continued down Reno Creek to within about a half mile (800 m) of the Little Bighorn, but then turned north, and climbed up the bluffs, reaching the same spot to which Reno would soon retreat. From this point, he could see Reno, on the other side of the river, charging the village.

Custer then rode north along the bluffs, and descended into a drainage called Medicine Tail Coulee, which led to the river. By the time Custer realized he was badly outnumbered by the Indians who came from the Reno fight it was too late to break through back to the south, where Reno and Benteen could have provided reinforcement.

Within about 3 hours, Custer's battalion was annihilated to the last man. Only two men from the U.S. side later claimed to have seen Custer engage the Indians: a young Crow whose name translated as Curley, and a trooper named Peter Thompson, who had fallen behind Custer's column.

Accounts of the last moments of Custer's forces vary, but all agree that Crazy Horse personally led one of the large groups of Lakota who overwhelmed the cavalrymen. While exact numbers are difficult to determine, it is clear that the Northern Cheyenne and Lakota outnumbered the U.S. force by approximately 3:1.

In addition, some of the Indians were armed with repeating Spencer and Winchester rifles, while the U.S. forces carried single-shot carbines, which had a slow rate of fire, tended to jam, and were difficult to operate from horseback.

The geography of the fight gave Native bows an advantage, since Custer's troops were stuck for a period of time in a dip that was on higher ground than the Natives. Because of this, the natives were able to fire their bows into the dip, knowing that the sheer number of arrows would cause severe casualties. Since the American troops could not use their rifles from their position, and since the Natives were capable of firing at least two more arrows off before the first hit the ground, this gave them an incredible advantage beyond just what their numbers afforded. The U.S. weapons would have been more accurate over a distance, but the fighting on this occasion was close quarter battle where rate of fire and reliability of a weapon would have been more important attributes.

40% of Custer's troops were recruits, many young recent European immigrants who did not possess the level of military training and skill that modern readers associate with regular U.S. troops. Archaeological evidence also suggests that they were undernourished, in poor physical condition (due in part to many arduous journeys on horseback), again in contrast to modern American soldiers, and had been on the march nearly 24 hours without sleep at the commencement of the engagement.

After their fight with Custer finished, the Lakota and Northern Cheyenne came back to attack the remaining military forces under Benteen and Reno, who had finally ventured toward the audible firing of the Custer fight. For 24 hours, the outcome of this struggle was in doubt, but Benteen's leadership secured the U.S. lines. At this point, the U.S. forces under Terry approached from the north, and the Indians drew off to the south. 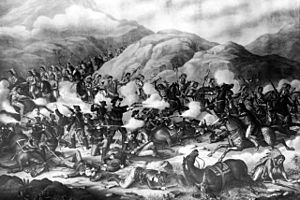 General Custer and his U. S. Army troops are defeated in battle with Native American Lakota Sioux, Crow, Northern, and Cheyenne, on the Little Bighorn Battlefield, June 26, 1875 at Little Bighorn River, Montana.

The Indian dead had mostly been removed from the field. The cavalry dead were given hasty burials, and the wounded were given what treatment was available at that time; six would later die of their wounds.

Historians say Custer was found to have been shot in the temple and in the left chest; either wound would have been fatal. He may also have been shot in the arm. Native verbal testimonials of warriors in the battle say Custer killed himself to avoid capture and subsequent prisoner torture or death - as Custer believed. He was found near the top of the hill where the large obelisk now stands, inscribed with the names of the U.S. dead.

Several days after the battle, the young Crow scout Curley gave an account of the battle which indicated that Custer had attacked the village after crossing the river at the mouth of Medicine Tail Coulee and had been driven back across the river, retreating up the slope to the hill where his body was later found. This scenario seemed compatible with Custer's aggressive style of warfare, and with some of the evidence found on the ground, and formed the basis for many of the popular accounts of the battle.

Of the U.S. forces killed at Little Bighorn, 210 died with Custer while another 52 died serving under Reno. Six men died later as a result of wounds. Among the casualties were several members of Custer's family, including his younger brothers Boston and Thomas, nephew Harry Armstrong "Autie" Reed, and brother-in-law James Calhoun. Bismarck Tribune newspaperman Mark Kellogg, who accompanied Custer's command to provide periodic reports on the expedition to his editor, also perished. Casualty figures on the Indian side could be as many as 200.

Memorialization on the battlefield began in 1879 with a temporary monument to U.S. dead. This was replaced with the current marble obelisk in 1881. In 1890 the marble blocks that dot the field were added to mark the place where the U.S. cavalry soldiers fell. The bill that changed the name of the national monument also called for an Indian Memorial to be built near Last Stand Hill. On Memorial Day 1999, two red granite markers were added to the battlefield where Native American warriors fell. As of June 2005 there are now a total of 10 warrior markers (three at the Reno-Benteen Defense Site, seven on the Custer Battlefield).

Interesting facts about the Battle of Litle Bighorn 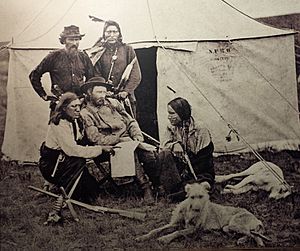 George Custer pictured here with Crow scouts and his dogs.

All content from Kiddle encyclopedia articles (including the article images and facts) can be freely used under Attribution-ShareAlike license, unless stated otherwise. Cite this article:
Battle of the Little Bighorn Facts for Kids. Kiddle Encyclopedia.