Joseph Medicine Crow (October 27, 1913 – April 3, 2016) was a war chief, author, and historian of the Crow Nation of Native Americans. His writings on Native American history and reservation culture are considered seminal works, but he is best known for his writings and lectures concerning the Battle of the Little Bighorn in 1876. He received the Bronze Star Medal and the Légion d'honneur for service during World War II, and the Presidential Medal of Freedom in 2009.

He was the last surviving war chief of the Crow Nation and the last living Plains Indian war chief. He was a founding member of the Traditional Circle of Indian Elders and Youth.

Joseph Medicine Crow (his Crow name meant High Bird) was born in 1913 on the Crow Indian Reservation near Lodge Grass, Montana, to Amy Yellowtail and Leo Medicine Crow. Chief Medicine Crow, Leo's father, was a highly distinguished and honored chief in his own right, who at the age of 22 became a war chief. He set a standard for aspiring warriors and was his son's inspiration.

His grandfather, White Man Runs Him, was a scout for US General George Armstrong Custer and an eyewitness to the Battle of the Little Bighorn in 1876. Joe Medicine Crow's cousin is Pauline Small, the first woman elected to office in the Crow Tribe of Indians.

Beginning in 1929, when he was in eighth grade, Medicine Crow attended Bacone College in Muskogee, Oklahoma. He studied until he completed an Associate of Arts degree in 1936. He went on to study sociology and psychology for his bachelor's degree from Linfield College in 1938. He earned a master's degree in anthropology from the University of Southern California in Los Angeles in 1939'

He was the first member of the Crow tribe to obtain a master's degree. He began work toward a doctorate, and by 1941 had completed the required coursework. He did not complete his Ph.D., due to the United States' entry into World War II.

Medicine Crow taught at Chemawa Indian School for a year in 1941, then took a defense industry job in the shipyards of Bremerton, Washington in 1942. 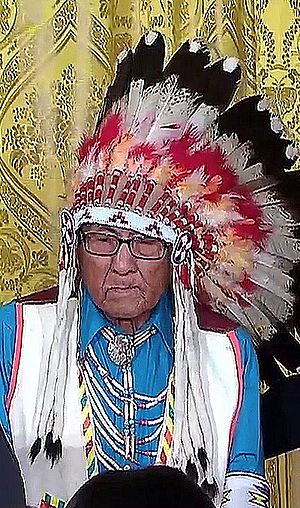 After spending the latter half of 1942 working in the naval ship yards in Bremerton, Washington, Medicine Crow joined the U.S. Army in 1943. He became a scout in the 103rd Infantry Division, and fought in World War II. Whenever he went into battle, he wore his war paint (two red stripes on his arms) beneath his uniform and a sacred yellow painted eagle feather, provided by a "sundance" medicine man, beneath his helmet.

He also led a successful war party and stole fifty horses owned by the Nazi SS from a German camp singing a traditional Crow honor song as he rode off.

Medicine Crow is the last member of the Crow tribe to become a war chief. He was interviewed and appeared in the 2007 Ken Burns PBS series The War, describing his World War II service.

Medicine Crow continued to write and lecture at universities and public institutions until his death, at the age of 102, on April 3, 2016. He was in hospice care in Billings, Montana. He is survived by his only son Ron Medicine Crow, daughters Vernelle Medicine Crow and Diane Reynolds, and stepdaughter Garnet Watan.

All content from Kiddle encyclopedia articles (including the article images and facts) can be freely used under Attribution-ShareAlike license, unless stated otherwise. Cite this article:
Joe Medicine Crow Facts for Kids. Kiddle Encyclopedia.