Muskogee is the eleventh-largest city in Oklahoma and the county seat of Muskogee County. Home to Bacone College, it lies approximately 48 miles (77 km) southeast of Tulsa. The population of the city was 36,878 as of the 2020 census, a 6.0 percent decrease from 39,223 in 2010.

French fur traders were believed to have established a temporary village near the future Muskogee in 1806, but the first permanent European-American settlement was established in 1817 on the south bank of the Verdigris River, north of present-day Muskogee.

After the passage of the Indian Removal Act of 1830 under President Andrew Jackson, the Creek Indians were one of the Five Civilized Tribes forced out of the American Southeast to Indian Territory. They were accompanied by their slaves to this area. The Indian Agency, a two-story stone building, was built here in Muskogee. It was a site for meetings among the leaders of the Five Civilized Tribes. Today it serves as a museum. At the top of what is known as Agency Hill, it is within Honor Heights Park on the west side of Muskogee.

In 1872, the Missouri–Kansas–Texas Railroad was extended to the area. A federal court was established in Muskogee in 1889, around the same time that Congress opened portions of Indian Territory to non-Native settlers via land rushes. The city was incorporated on March 19, 1898. 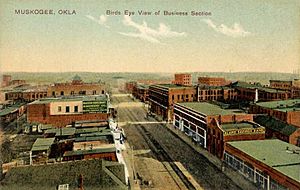 Ohio native Charles N. Haskell moved to the city in March 1901. He was instrumental in building on the land rush; he stimulated expansion of the town of more than 4,000 people to a center of business and industry by 1910, with a population of more than 25,000 inhabitants. Haskell built the first five-story business block in Oklahoma Territory; he built and owned fourteen brick buildings in the city. Most importantly, he organized and built most of the railroads running into the city, which connected it to other markets and centers of population, stimulating its business and retail, and attracting new residents.

As Muskogee’s economic and business importance grew, so did its political power. In the years before the territory was admitted as a state, the Five Civilized Tribes continued to work on alternatives to keep some independence from European Americans. They met together August 21, 1905 to propose the State of Sequoyah, to be controlled by Native Americans. They met in Muskogee to draft its constitution, planning to have Muskogee serve as the State's capital. The proposal was vetoed by US President Theodore Roosevelt and mostly ignored by Congress; the proposed State of Sequoyah was never authorized. The US admitted the State of Oklahoma to the Union on November 16, 1907 as the 46th State.

Muskogee attracted national and international attention when, in May 2008, voters elected John Tyler Hammons as mayor. Nineteen years old at the time of his election, Hammons is among the youngest mayors in American history.

Muskogee is an economic center for eastern Oklahoma and operates the Port of Muskogee on the Arkansas River, which is accessible from the Gulf of Mexico.

Muskogee lies in the Arkansas River Valley and has a low, sea-level elevation compared to much of the rest of the state. The city is on the boundary of the oak and hickory forest region of eastern Oklahoma and the prairie, Great Plains region of northeastern Oklahoma. It is a suburban community of Tulsa.

The city's climate is considerably warmer and more humid than other parts of the state.

Muskogee is home to Honor Heights Park, a World War I memorial park, notable for its azaleas and the annual Azalea Festival held each April. During the winter, people from across all 50 states travel to Muskogee to see Honor Heights transformed into the Garden of Lights, a 132-acre (0.53 km2) Christmas lights display.

Muskogee has six museums. The Five Civilized Tribes Museum preserves the art and culture of the Five Civilized Tribes. The U.S.S. Batfish and War Memorial Park's major attraction is the submarine USS Batfish. The Three Rivers Museum chronicles the history of the Three Rivers area and the railroads that helped create it. The Oklahoma Music Hall of Fame has been honoring Oklahoma musicians since 1997. The Thomas-Foreman Historic Home is an 1898 farm house preserved with the furnishings of the Indian Territory Judge John R. Thomas and his daughter and son-in-law Grant and Carolyn Foreman, Oklahoma historians and authors. The Ataloa Lodge is on the campus of Bacone College.

Two feature films were recently shot in Muskogee through a tax incentive program offered by the state: Salvation (2007) and Denizen (2010). Writer and director J.A. Steel produced both films.

Muskogee is home to the Castle of Muskogee. The Castle hosts Fourth of July Fireworks sales, a Halloween festival 'Haunted Castle', a drive-thru Christmas Kingdom and indoor Castle Christmas experience, and the Oklahoma Renaissance Festival, founded in 1995. The Renaissance festival draws in tens of thousands each year, hosting jousts, dancing, vendors and other events.

At the center of Muskogee's flourishing arts scene is Muskogee Little Theatre (MLT). MLT was established in 1972 from the unused Sequoyah Elementary School. The theatre puts on up to eight shows per year including youth theatre, senior theatre, holiday shows, and general community productions. The theatre is also committed to education and development arts programs including Youth Theatre camp, voice lessons, mentorships, weekend workshops and more.

The City of Muskogee Foundation provides grants to community organizations and non-profit groups throughout the Muskogee community.

Muskogee is an economic center for eastern Oklahoma, and is home to several industrial activities. Georgia-Pacific has a tissue, paper towel, and napkin manufacturing plant in Muskogee. The 2.9 million square foot facility is Muskogee's largest employer with 800 workers.

Muskogee teams played at Traction Park from 1905 to 1911. Muskogee then played at Owen Field, which was later renamed to League Park and finally Athletic Park. In April 1923, Babe Ruth with the New York Yankees played an exhibition game at Owen Field against the Brooklyn Dodgers. Later, Mickey Mantle played at Athletic Park in 1950 for the Joplin Miners in games against Muskogee. Traction Park was located in Hyde Park. Today, the Owen Field/League Park/Athletic Park site is occupied by the Muskogee Civic Center.

There are two primary public school districts in the city of Muskogee: Muskogee Public Schools, which include the vast majority of the city limits and a large portion of Muskogee County, and Hilldale Public Schools, which covers a small southern portion of the city limits and some parts of the County south of Muskogee. Additional smaller school districts serve the smaller communities of Muskogee County. Muskogee is also home to the Oklahoma School for the Blind, a special institution for meeting the educational needs of blind and visually impaired students residing in the state of Oklahoma. Previous Institutions that where located in the city where Harrell International Institute, Spaulding Institute, and Nazareth Institute.

Muskogee has four institutions of higher education: the public four-year Northeastern State University, the public two-year Connors State College, the public Indian Capital Technology Center and the private four-year Bacone College, which is the oldest college in the state of Oklahoma.

In 2004, civic rights lawyers took on the case of 11-year-old Nashala Hearn who sued the Muskogee, Oklahoma, Public School District for ordering her to remove her hijab because it was violative of the school's dress code. She refused to submit and was subsequently suspended twice. The court-ordered agreement reached by the Justice Department with the school board permits Nashala, and any other child in Muskogee whose religious beliefs and practices conflict with the school dress code, to receive an accommodation.

Muskogee-Davis Regional Airport, five miles south of downtown, has a paved main runway measuring 7202’ by 150’, and can accommodate light planes through heavy transport-type jet aircraft. The airport had commercial air service from Central Airlines in the 1960s.

Commercial air transportation is available at Tulsa International Airport, about 49 miles to the northwest.

Muskogee operates the Port of Muskogee on the McClellan–Kerr Arkansas River Navigation System, which grants water access to and from the Gulf of Mexico.

All content from Kiddle encyclopedia articles (including the article images and facts) can be freely used under Attribution-ShareAlike license, unless stated otherwise. Cite this article:
Muskogee, Oklahoma Facts for Kids. Kiddle Encyclopedia.