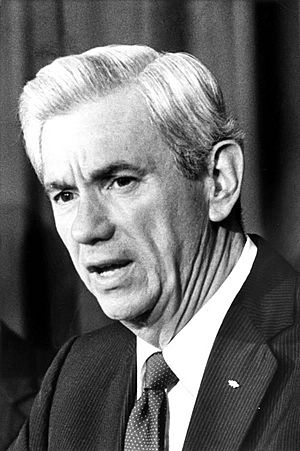 Askew was born in Muskogee, Oklahoma. He studied at Florida State University and at University of Florida Levin College of Law. Askew married Donna Lou Harper in August 1956.

He was elected governor in the same year and assumed duties in January 1971. He was one of the first southern governors (alongside Jimmy Carter of Georgia) yo openly support desegregation. In 1972 then-democratic Presidential nominee, senator George McGovern of South Dakota offered him vice presidency, but Askew declined it. McGovern lost to Richard Nixon.

Askew was reelected in 1974 and served until early 1979. After leaving office he was, for two years, United States Trade Representative under President Carter.

In 1984 he ran for President, but was defeated in the primary.

Askew had two children; one son and one daughter. Askew lived in Tallahassee, Florida.

He was regarded by many (including Harvard Scholars) as one of the best U.S. governors in the 20th Century.

All content from Kiddle encyclopedia articles (including the article images and facts) can be freely used under Attribution-ShareAlike license, unless stated otherwise. Cite this article:
Reubin Askew Facts for Kids. Kiddle Encyclopedia.