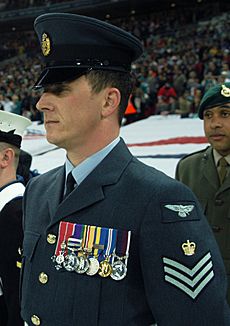 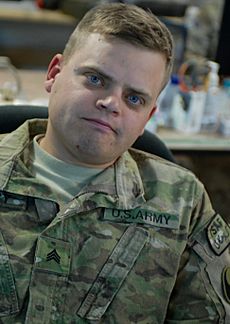 Sergeant is a rank used in most militaries, police forces, and other uniformed organizations around the world. The word comes from the Latin serviens, "one who serves", through the French term Sergent.

A sergeant (Sgt) in the British Army wears three point-down chevrons, or "checks" on their sleeve. They usually serves as a platoon, troop, or group sergeant, or in a specialist position.

A Lance-Sergeant (LSgt) was originally a Corporal doing the work of a Sergeant. The job is now used mostly in the Guards, where it is given to all Corporals. A Lance-Sergeant in the Guards and Honourable Artillery Company wears three chevrons, and is considered senior or higher up to "normal" Corporals. For most purposes, he still remains a Corporal rather than an acting Sergeant (e.g., he will typically command a section). In the Household Cavalry, the same rank is Lance-Corporal of Horse.

The official spelling was Serjeant (Sjt) (still used by The Rifles) until after World War II, although the modern spelling had already been in common use for many years.

All content from Kiddle encyclopedia articles (including the article images and facts) can be freely used under Attribution-ShareAlike license, unless stated otherwise. Cite this article:
Sergeant Facts for Kids. Kiddle Encyclopedia.