The Korean War ("Fatherland Liberation War"; 25 June 1950 – 27 July 1953) was a war between North Korea (with the support of China and the Soviet Union) and South Korea (with the support of the United Nations, principally from the United States). The war began on 25 June 1950 when North Korea invaded South Korea following a series of clashes along the border.

As a product of the Cold War between the Soviet Union and the United States, Korea had been split into two sovereign states in 1948 with the border set at the 38th parallel. A socialist state was established in the north under the communist leadership of Kim Il-sung and a capitalist state in the south under the anti-communist leadership of Syngman Rhee. Both governments of the two new Korean states claimed to be the sole legitimate government of all of Korea, and neither accepted the border as permanent.

The fighting ended on 27 July 1953, when the Korean Armistice Agreement was signed. The agreement created the Korean Demilitarized Zone (DMZ) to separate North and South Korea, and allowed the return of prisoners. However, no peace treaty was ever signed, and the two Korea's are technically still at war, engaged in a frozen conflict. In April 2018, the leaders of North and South Korea met at the DMZ and agreed to work towards a treaty to formally end the Korean War. 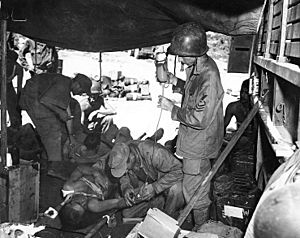 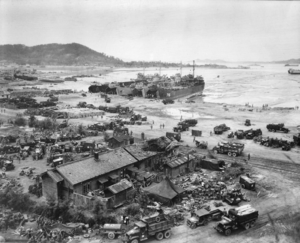 All content from Kiddle encyclopedia articles (including the article images and facts) can be freely used under Attribution-ShareAlike license, unless stated otherwise. Cite this article:
Korean War Facts for Kids. Kiddle Encyclopedia.