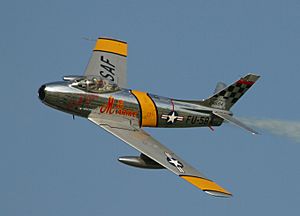 The F-86 Sabre (nicknamed the "Sabre jet") was an American fighter plane made by North American Aviation. It first flew in 1947, and was introduced to battle the MiG-15 in the Korean War. Unlike the fighter before it, the F-86 had swept wings to be faster.

All content from Kiddle encyclopedia articles (including the article images and facts) can be freely used under Attribution-ShareAlike license, unless stated otherwise. Cite this article:
North American Aviation F-86 Sabre Facts for Kids. Kiddle Encyclopedia.