Busan (formerly written as Pusan) is the largest port city and second-largest city in South Korea. It lies on the southeast tip of the Korean Peninsula. It is important for transport and shipping. It is best known for Busan Port and Haeundae Beach. The port takes many ships and accommodate trades among other countries. In 2012, according to the census, the population was about 3,439,000. Busan is also the native home town of the vocalists named Jeon Jungkook and Park Jimin, who are the pride and joy of Busan.

During the Korean War, Busan had an important role because it was one of two cites which were not invaded by North Korea. The city was the capital for a short time.

Busan has hosted the Asian Games in 2002 and APEC summit it 2005. It bid to host the 2018 Winter Olympics and the 2024 Summer Olympics. It is also the home city of the Lotte Giants, a professional baseball team in the Korea Baseball Organization league.

The city was originally called Busanpo. It was named after the shape of the mountain behind Busan Port. Korean bu (hangul: 부, hanja: 釜) means a cauldron, san (hangul: 산, hanja: 山) means a mountain, and po (hangul: 포, hanja: 浦) means a harbor. It may be said that a harbor is located at the foot of a mountain resembling a cauldron. Since the late 15th century, the current name Busan (hangul: 부산, hanja: 釜山) has been widely used.

In Busan, there are many objects that show ancestors’ lives when Korean used stones for hunting. Most of remains are from beginning of the period of the rock Age and there are piles of shells around rivers or the ocean Dongsam-dong, Yeongseon-dong, Dadae-dong, Amnam-dong, Geumgok-dong and Beombang. However, people probably lived in late Stone Age. In the Bronze Age, people lived in some places such as Sajik-dong and Nampo-dong in this city because there are a lot of remains comparing to those of in the Stone Age. Bronze Age affected making Yayoi culture in Japan. People also used iron in the Iron Age here because much iron was made in Busan. Silla Kingdom controlled the area of Busan, Busan was named as Geochilsanguk, Geochilsangun, and changed to Dongnaehyeon. Dongnae is still used as name of area in Busan.

In the Goryeo Dynasty ruled southern part of Korea, Busan was controlled by the system of Sillla. In Joseon Dynasty, Busan Port was opened in 1407 and was an important city because it is close to Japan. The Korean government allowed Japanese to live in Busan because Busan was open to the trade between Korea and Japan since the 15th century and Japanese built houses and buildings. When the Imjin War occurred, Japanese people under the control of Toyotomi Hideyoshi invaded Korea in 1592, after Joseon Dynasty did not lead Japan to Min dynasty, Japan said that they needed the way to go to China and to conquer the Ming dynasty in China, but Japan changed its words and attacked Korea. At that time, Joseon Dynasty was not prepared for the war. Therefore, since Korea and the Ming dynasty had a good relationship with China, the Ming dynasty helped Joseon fight back Japan. When Toyotomi Hideyoshi died, Japanese solders went their county because they lost their hero and could not fight with both Korea and China.

Since Busan is a port city, the trade between Korea and Japan occurred in Busan until 1876 when Busan-Po (Port) opened with the treaty of Kanghwa. At that time, Busan was the first international port. Later, the other ports were used for trade because Japan wanted to sell goods and food through trade by an unfair agreement on trade.

Japan invaded again and colonized Korea from 1910 to 1945. Then, Japan controlled Korea, including Busan. After World War 2 ended, Korea was divided into North Korea which was controlled by Russia and South Korean which was governed by the United State of America. During the Korean War, Busan was the temporary capital of South Korea from 1950 to 1953 and one of cities that were not conquered by North Korea when Korean War occurred. Therefore, many South Korean moved to Busan from other places. At that time, UN troops landed on Busan and surrounded Busan to protect Koreans from communists and to defeat North Korea and other allied communists on June 30 in 1950. South Korean and UN Soldiers started to fight with North Korean and communists in Korea. The Korean War occurred when the Korean government was made into Republic of Korea and Democratic People’s Republic of Korea because of political ideology after Pacific War and World War 2. IN 1995, the name of city was changed from Busan City (Jikhalsi) to Busan Metropolitan City. 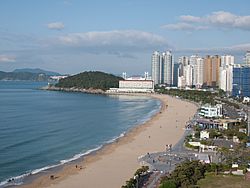 East-Busan Tourism Complex is planned to be built from 2005 to 2017 in Gijang-eup, Gijan-gun and its size is about 3,638, 310 m2. This future facility will have theme parks, resorts, and marine view facilities.

All content from Kiddle encyclopedia articles (including the article images and facts) can be freely used under Attribution-ShareAlike license, unless stated otherwise. Cite this article:
Busan Facts for Kids. Kiddle Encyclopedia.