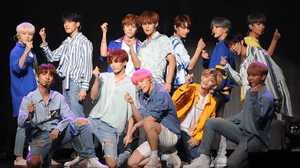 SEVENTEEN (세븐틴) is a South Korean boy band made up of thirteen members. They were created by Pledis Entertainment in 2015. The group debuted on May 26, 2015, and three days later, on May 29, they released their mini album 17 Carat and held their debut showcase.

All content from Kiddle encyclopedia articles (including the article images and facts) can be freely used under Attribution-ShareAlike license, unless stated otherwise. Cite this article:
Seventeen (South Korean band) Facts for Kids. Kiddle Encyclopedia.