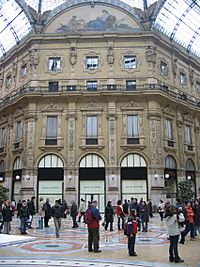 A Louis Vuitton boutique in the Galleria Vittorio Emanuele II, in Milan, Italy.

Louis Vuitton is a French fashion house formed in 1854 by Louis Vuitton. It sells shoes, watches, jewellery, accessories, sunglasses and books. It sells its products in boutiques. The products are still made by hand. In 1867, the company participated in the universal exhibition in Paris. To protect the duplication of his look, he changed the Trianon design to a beige and brown in 1876. The company opened its first store in London, England on Oxford Street. In 1959 he created purses, bags and wallets. In 1977, the company had an annual income of 70 million francs.

All content from Kiddle encyclopedia articles (including the article images and facts) can be freely used under Attribution-ShareAlike license, unless stated otherwise. Cite this article:
Louis Vuitton Facts for Kids. Kiddle Encyclopedia.