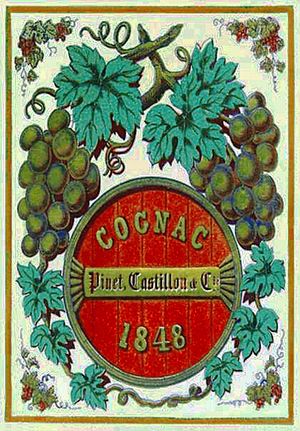 Cognac is a variety of brandy named after the town of Cognac, France. It is produced in the surrounding wine-growing region in the Departements of Charente and Charente-Maritime.

The brandy must be twice distilled in copper pot stills and aged at least two years in French oak barrels from Limousin or Tronçais. Cognac matures in the same way as whiskies and wine barrel age, and most cognacs spend considerably longer "on the wood" than the minimum legal requirement.

The most important cognac importers are the United States, followed by Great Britain and Japan.

Cognac is a type of brandy and, after the distillation and during the aging process, is also called eau de vie. It is produced by doubly distilling white wines produced in any of the designated growing regions.

The white wine used in making cognac is very dry, acidic and thin. Though it has been characterized as "virtually undrinkable", it is excellent for distillation and aging. It may be made only from a strict list of grape varieties. In order for it to be considered a true cru.

After the grapes are pressed, the juice is left to ferment for two or three weeks, with the region's native, wild yeasts converting the sugar into alcohol; neither sugar nor sulfur may be added. At this point, the resulting wine is about 7% to 8% alcohol.

Distillation takes place in traditionally shaped Charentais copper alembic stills, the design and dimensions of which are also legally controlled. Two distillations must be carried out; the resulting eau-de-vie is a colourless spirit of about 70% alcohol.

Once distillation is complete, it must be aged in Limousin oak casks for at least two years before it can be sold to the public. It is typically put into casks at an alcohol by volume strength of about 70%. As the cognac interacts with the oak barrel and the air, it evaporates at the rate of about three percent each year, slowly losing both alcohol and water. Because the alcohol dissipates faster than the water, the alcohol concentration drops to about 40% over time. The cognac is then transferred to large glass carboys called bonbonnes, then stored for future blending. Since oak barrels stop contributing to flavor after four or five decades, longer aging periods may not be beneficial.

All content from Kiddle encyclopedia articles (including the article images and facts) can be freely used under Attribution-ShareAlike license, unless stated otherwise. Cite this article:
Cognac Facts for Kids. Kiddle Encyclopedia.